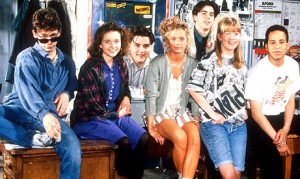 HER OFF of Absolutely Fabulous, him off of Hotel Babylon, the geeky one from Trevor’s World of Sport, the affable one from EASTENDERS (and there is only one these days) and Gonch Gardner’s sister get together with him who writes all the best episode of present day DR WHO and come up with the finest children’s drama series ever made. The lives, loves and losses of a bunch of supremely everyday, yet also extraordinary, sixth formers schlepping their way through Norbridge High then manically moonlighting in an office with one phone (“Who’s paying for it?” “Not us”), one front door (apart from Colin’s secret exit) and a fountain of the finest dialogue this side of the watershed: “I’m thinking of habits I’m wanting to kick” “So I’m a habit already?” “You’re something I’m wanting to kick”…”Has anyone ever told you you’ve got a wonderful vocabulary?” “I always knew that. I just could never put it into words”…”Graphic Department spending proposals. An HB pencil and a sunbed?” “Well, I can explain the pencil”…”Tell me, how do you justify being off work at her funeral on no less than eight separate occasions?” “She is my aunt!” “Kenny – this woman has died eight times!” “How do you think I feel?”…”Who hates me enough to want to get me battered senseless by Malcolm the shaving gorilla?” “I’ll get the list”…”Why do I do so many major scenes in my life dressed in my pyjamas?”…”Thanks.” “For what?” “I don’t know. Everything.” “I’m not responsible for everything. I just make it look that way.” Lynda was the editor, Kenny her assistant and best friend, Spike her obsession and everybody else’s punchline, Colin the money man, book-cooker and oil sheik-impersonator, Sarah the boring lead writer, Frazz the stooge, Tiddler the small one, Sam the mouth, Julie the replacement and Mr Kerr the man upstairs. Romance, death, pigeons, pizza, Czars, ping-pong balls, hiccups, plant pots, lampposts that light up by magic, crossed lines, bad cardigans, giant rabbit costumes, swear boxes, sieges, drugs, shootings, explosions, nightmares, comings, goings and lots and lots of endings: all from the pen of STEVEN “CHALK” MOFFAT. Never before, or since, have the funniest and the saddest storylines in the world come together to sing in such perfect harmony. The only programme to make staying behind after school look thunderously exciting. Tommy Boyd declared it the best thing he’d ever seen, and who are we to disagree?