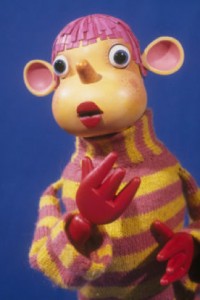 SALIVA-SATURATED SILLINESS from Mrs Roland Rat, aka ANNE WOOD. Eponymous goblin-esque creature with over-sized ears and a pink and yellow striped jumper too big for him would purport to “get inside” your TV once a week to “interrupt” normal transmissions as and when he pleased. Our host would then introduce the likes of Rod Campbell demonstrating various complex ways to open a surprise box, which was then always repeated (“Again?”); Czechoslovakian animations such as MAXI-DOG; and Dick King-Smith endlessly meandering around the countryside accompanied by his dog Dodo. Special guests then arrived in Pob’s “garden” via a long piece of string along which were attached various clues. Said visitors turned out to be of surprisingly high calibre, including SPIKE MILLIGAN, BRIAN BLESSED, CHARLIE WILLIAMS and POLLY JAMES. Most memorable of all, though, was Pob’s distinctive means of introduction: “breathing” onto your TV screen then rubbing a hole in the “condensation” – basically, glorified spitting.