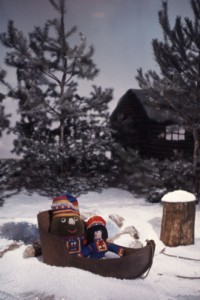 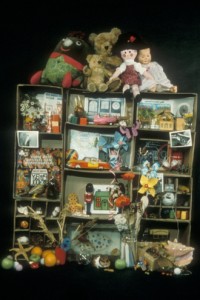 Or, if you’re of a previous generation – “Ready to knock?/Turn the lock…” Not as good, though. A legend in several million lifetimes of Brits from 20 to 40, Play School ran from the late sixties to the early/mid ’80s almost unchanged in format, with only a switch to colour and a radical cosmetic facelift in the early ’80s (to a Teletubbies-dwarfing storm of parental protest).

Basically, each day of the week (carefully identified at the start), two presenters, male and female, chosen from the mindstopping roster below, would say a cheery “hullo”, before swiftly moving on with the day’s business, which would originate from what was “under the clock”. This object would then form the loose “theme” of the show, which went, roughly, thus:

A “make and do” kind of project would ensue, often utilising toilet rolls and “get a grown-up to help you with the” scissors.

This would lead into a song/dance routine in a white studio limbo.

About this time, it was back to the clock for the obligatory time-telling session (“Now, the big hand’s pointing straight up, so that means it’s something o’clock…”).

Then back to that makey thing, and the legendary “real world” link via the round/square/arched window (cue harp chords and patented seventies wobble dissolve). The film shown was nearly always biscuits/cakes/shoes etc. being made in a factory. And mesmerising it was, too.

Then back to the studio, and here’s where we had the Playschool pets (ever-changing out of necessity, but including along the way Bit and Bot (goldfish who, it was terrifyingly revealed to many a five-year old, had no eyelids! “But it’s alright…” No it wasn’t!), Buffy (rabbit), Lizzie (Guinea Pig), “The Mice” and K’Too, the cockatoo who danced to JONATHAN COHEN’s piano and “could live to be 100 years old” (he didn’t).

Alternatively, we had the toys: Jemima (red-cheeked floppy cloth effort in Laura Ashley frock), Hamble (awful, scary Bjorkesque Victorian porcelain doll thing – ugh! Often the target on in-studio “drawn-on pubic hair” japes), Humpty (the coolest – round, fat green fucker in tartan trews, prone to unsteadiness atop a cardboard wall – did all his own stunts) and Big Ted and Little Ted Bear (from nowhere in particular). Oh, and Dapple, the rocking horse.

Then came the story – something like Barbar the Elephant or The Bears Who Stayed Indoors.

Then possibly, another song, then it was “B’bye!” till next time.