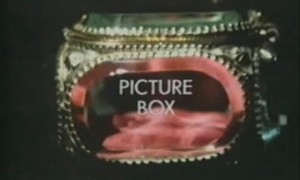 NO-NONSENSE BRAN TUB of films from around the world selected to “stimulate the creative imagination of children” initially produced by BRIAN COSGROVE and presented by DOROTHY SMITH (first outing: “A Calm Country River in Holland”). In 1969, the friendly-but-dull ALAN ROTHWELL (catchphrase: “Hello!”) took over, kicking off with hardy perennial THE RED BALLOON, and remained in the driving seat for the duration. Shortly after that, the trademark opening blurred footage of a rotating jewelled casket was installed, accompanied by those timeless off-kilter strains of ‘Manege’ by Structures Sonores’ Lasry-Baschet. The Little Match Girl, The Forth Road Bridge, Amelia and the Angel and Czech animator Karel Zeman’s Mr Prokouk films (a sort of sub-Prof off of VISION ON pork pie hatted inventor) were regular visitors to the hypnotic world of Rothers. Alan took a breather in the spring of ’72 as BARRY SMITH and his theatre of puppets – then also doing sterling work with Al’s other kids’ show, HICKORY HOUSE – took over. In ’74 came activity pack back-up and programme advisers, as the education got serious. Marcel Marceau cropped up a lot, as did cartoon opera The Bricklayers Built a Crooked Chimney, Niko: Boy of Greece, that Canadian cartoon wherein one Dr. Philip Square tunnelling into the Earth’s core and propelling himself back again via the evaporated piss of his pet dog, and “a close, unusual look at the cow”. Survived into the late ’80s, though the move to Channel Four with the rest of the ITV schools’ output brought a new, brasher title sequence and a significant reduction in that queasy wonder quotient.