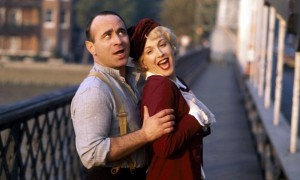 PSYCHOLOGICAL HOT shoe shuffle from the predictably barbed pen of DENNIS POTTER, here funnelling his usual concerns (treacherous husbands, put-upon wives, over-made-up prostitutes) into the life of BOB HOSKINS, a cardboad-suited 1930s sheet music salesman prone to breaking into other people’s songs at convenient plot points. GEMMA CRAVEN was his missus having to put up with Bob’s penchant for a quick Charleston while she was trying to do the pots. CHERYL CAMPBELL was the bit on the side that almost brought the entire edifice tumbling down, while KENNETH COLLEY turned up from time to time as the Accordion Man, a convoluted concoction that wasn’t real but thought he was but actually wasn’t. Or something. Actually one of Potter’s best efforts, though that’s largely by virtue of most of the rest of his work being crap.