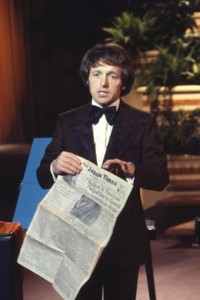 THE NATION’S number one syrup-sporting sorceror and whiny voiced-wizard held sway over prime-time BBC1 for a hell of a long time, presenting well-honed, exhibiting his executions of classic magic tricks (which people tend to forget) in a rather annoying and charm-free way (which people can’t help but remember). For variety’s sake, various regular “segments” were contrived to bracket the routines – The Bunco Booth (“I win and you loose” read the hoarding as Daniels duped an audience stooge in the manner of an American funfair huckster, while wearing a silly hat), Under Laboratory Conditions (over-serious close-up magic with several witnesses and a superimposed tabletop camera view – Daniels’ riposte to Gellereque charlatans), House of Cards (card tricks presented from within a giant ‘card house’ set, and another silly hat) and latterly Mississippi Riverboat Magic (cartoon sting leads into old-timery period set for the usual fingertip shenanigans). Also The Magic Square, which was just The Brian Rogers Connection doing dances with ribbons. All ably assisted by “the lovely” Debbie McGee. Oh, and the extra-curricular “cream of variety acts from around the world”, who ranged from the sublime (the legendary escapologist Hans Moretti) through the quirky (crosstalking jugglers The Brothers Karamazov) to the just plain bizarre (a bloke who pretended to cut his fingers off, a bloke who threw playing cards at watermelons, and an old Heath Robinson inventor type who brought in his whimsical inventions and just talked about them). Infamous late ’80s Halloween Special ended with an iron maiden-based trick that apparently went wrong in front of various B-list celebs (who weren’t in on the sting), until – after a repeat of the Biggles Dictates a Letter PYTHON episode – Daniels turned up with a cheeky “I’m still alive, ha ha!” coda. Spinoffs included the Paul Daniels Magic Trick range (rather nifty, as it happened – boxed in odd lozenge-shaped packages and graded Blue (easy), Red (fairly easy), Purple (slightly harder) and Black (“master magician”, ie impossible) – “all from the House of Dubrecq!” as YesPaul chirped in the TV ads which he shared with Rolf Harris’ Stylophone and painttube brushes – as well as boxed sets and books), ODD ONE OUT and EVERY SECOND COUNTS (game shows) and WIZBIT (not good).