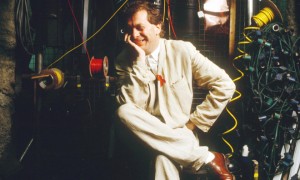 IT WAS the best of times, it was the blurst of times. Having manufactured, variously, a menstrual egg-timer, record sleeves made of sandpaper, a desk that hung from a boardroom ceiling and numerous long-running feuds, the late great TONY “ANTHONY H” WILSON decided to turn his hand to, naturally, a late night magazine programme. After all, Manchester was where it was all happening back then, even if it amounted to little more than yet another re-release of Blue Monday. Hence this: a pretentious-as-hell “arts review” which somehow landed a slot on night-time network ITV. From within a set entirely furnished by IKEA (when they only had one store in Warrington and they were trendy), Tone held forth on acid house, himself, the opening of the Liverpool Tate (“Have they got the Rothkos right?” Anthony says: yes!), Martin Amis, Peter Greenaway, Factory Records, himself, why Manchester was the greatest city in the world, the Hacienda, why Ian Curtis would have been bigger than Bono, and himself. It’s claimed every single person who saw the show later went off and formed a band. Sadly, they were all shit.