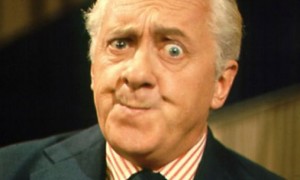 FANFARE FOR the common man, woman, child, four-piece close-harmony crooners, assorted domestic pets and muscle-bound mincers. The personal fiefdom of HUGHIE GREEN, who in-between trying to save the nation from socialist revolution and conceiving PAULA YATES, considered it his duty to scour the country’s highways and byways in order to serve up a generation of variety entertainment bar none. Instead what he found was PAM “OI WISH OI’D LOOKED ARFTER ME TEETH!” AYRES, LITTLE AND LARGE, FREDDIE “PARROT FACE” DAVIES, LENA ZAVARONI, MARY HOPKIN, TOM O’CONNOR and PETERS AND LEE. Ever-present Clapometer would “register” audience approval, then viewers were invited to write in (no expense spared here) to nominate their favourite from among each week’s most popular artistes. Winner would be “revealed” the following week, when they’d go up against the latest batch of jesters, and so on. SU POLLARD was beaten by a singing dog, so at least the country had some sense. Revived by BOB MONKHOUSE in 1987 as BOB SAYS OPPORTUNITY KNOCKS or Bob Knox as he preferred to call it, the world’s first ever phone-in talent show with proper candidate lists in Radio Times and everything.