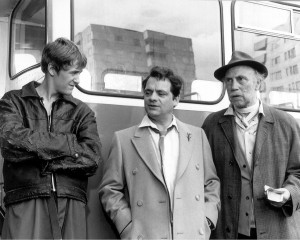 “BUSH, BUSH, BUSH, BUSH, BUSH, BUSH, BUSH”. Still your best chance of getting a glimpse of a branch of Supercigs or Spud-U-Like, JOHN SULLIVAN’s uber-com – originally to be titled READIES – is alternately great and woeful. In the great bracket: “It’s Barratt’s!”, the Peckham Pouncer, “Cwying!”, ‘The Longest Night’ (best episode ever) and – yeah – we’ll say it: the Batman and Robin bit. And as for the woeful? ‘If They Could See Us Now’ (worst episode ever), Raquel, that one with the bottled water, all the Omen stuff and the clunky pop cultural references (“Have you ever spent a night with Trigger? It’s like holding a seance with Mr Bean”). But, to be fair, anything up until Cassandra arrives is top, and a different opening and closing theme is bonus points in anyone’s book – particularly when there’s the none-more-eighties line: “Ball games, gold chains, whassa-names, and at a push, some Trevor Francis tracksuits”.