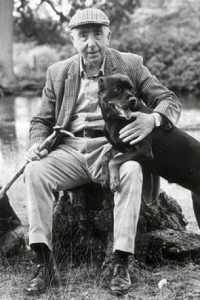 CANINE AND company for the wind-hewn, welly-bound well-to-do. While bunking off from Television Centre one day, BBC producer Philip Gilbert decided to spend a day attending a pissing-it-down agricultural show in Northumberland. Inspired, it seems, by the sight of an authentic sheepdog trial, he became gripped with the desire to put the whole thing on telly, despite the rituals of the handlers and their faithful Border Collies boasting less dynamism than a still-life painting. So ONE MAN AND HIS DOG was born, with presenting duties handled by bluff, hang-the-bastards countryman PHIL DRABBLE and learned boffin ERIC HALSALL. Buried in the traditionally healthy slot of early Sunday evenings the show flourished and ran for ages. The team mutated through a line-up that included RAY OLLERENSHAW, 12-year Chairman of the International Sheep Dog Society, and GUS DEMODY. Drabble relinquished his role after a marathon 18 years, giving way to latterday anti-licence fee campaigner ROBIN PAGE. It was MARK THOMPSON, in one of his last acts as BBC2 Controller, who called time on the whole ridiculous roustabout, prompting the inevitable hysterical outrage and the ever-reliable wheeze of questions being asked in parliament. For a time it was rumoured Sky One was ostensibly considering launching its own version, titled, inevitably, “Sky One Man and His Dog”. Dermody fumed: “I have had complaints from farmers who have said they could not watch it on a Saturday afternoon because they are working,” perhaps somewhat overlooking the ubiquity of the everyday video recorder. Nonetheless, one-off specials still turn up unexpectedly, like a pile of horse shit in a spotless field.