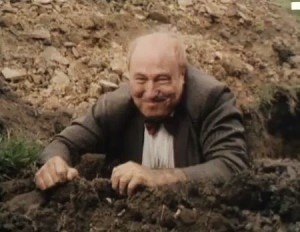 Municipal hole-digger Selwyn Froggitt, created by playwright Alan Plater and portrayed by Bill Maynard, is one of the great clown turns of sitcom. He’s almost childlike in his relentless, hyperactive enthusiasm (life’s one big double-thumbs-up), yet habitually accident prone, a one-man whirlwind of ebullient destruction.

Living with his train-obsessed brother Maurice and absent-minded, pensionable mum in the Yorkshire town of Scarsdale, Selwyn enjoys a simple life of digging holes, drinking beer and wrecking public property. Despite avidly reading The Times (‘It’s great! On Sundays you get three and a book!’) and bandying words like ‘aesthetic’ about with confidence, Maynard’s stuttering, red-faced hero remains several steps behind everyone else, notably his compadres at the working men’s club, including shifty, gimlet-eyed barman Ray (Ray Mort) and humourless club president Jack (Bill ‘Harry Cross’ Dean, who also penned the lyrics to the lilting male voice choir theme tune, which winningly changed each week to document that episode’s misadventures in between its immortal ‘never mind’ refrain).

Endless mucky holes, flyblown club interiors and pints of cookin’ conspired to make this the brownest sitcom in history. A holiday camp sequel in 1978, SELWYN, backfired, but Yorkshire Television gave Maynard a worthy 1980s successor in THE GAFFER, where his professional incompetence moved with the times into the private sector.