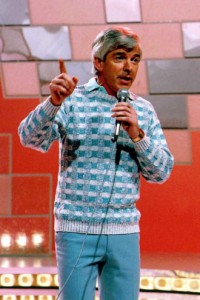 WE’VE BEEN treated to a succession of vehicles for Scouse stand-up and self-styled “Mr Clean” Tom O’Connor down the years, following the man’s graduation from maths teacher via OPPORTUNITY KNOCKS to THE COMEDIANS. First off was THE TOM O’CONNOR SHOW (1976-7) for Thames, which was yer bog-standard frilly-shirted patter. Then came TOM O’CONNOR (1984-87) in which Tom promised to “take the lid off life” in a succession of “quickfire sketches” featuring DEREK GRIFFITHS, MIKE “BLUE RIBAND” BERRY, CHRIS “321” EMMETT and CHERRY “HOT SHOE SHOW” GILLESPIE. Best of all, though, was travelling lunchtime entertainment showcase THE TOM O’CONNOR ROADSHOW (1987), in the slot vacated by DOMESDAY DETECTIVES. This entailed O’Connor and ‘Mill-level guests pitching up at some dismal provincial outpost for a week, meeting “the local characters” and attempting to entertain the few busfuls of pensioners who showed up thinking it was Des O’Connor. Highlight was The Accumulator Game, in which three contestants’ scores were symbolised by cardboard buses trundling across the screen. Still on telly, mostly in Dictionary Corner, but there’s no reason at all why this most genial of gents shouldn’t be, say, hosting the Lottery or The One Show. Fact.