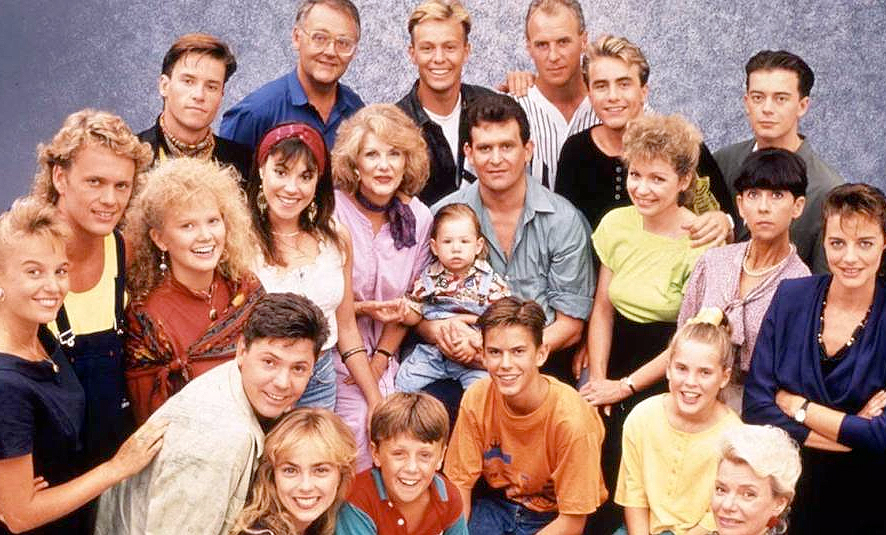 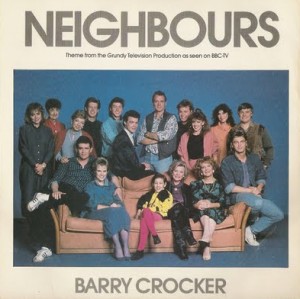 EVERYBODY NEEDS good ones. It helps to make the perfect blend. And just a friendly wave each morning, or in our case each lunchtime and teatime, can turn them from mere NEIGHBOURS into, ahem, good friends.

The whole world knows about who used to be in this show, so instead here are ten choice historic Ramsay Street escapades:

It was the Montague and Capulet romantic sparring betwixt Scott Robinson and “Lenny” Ramsay that, according to received wisdom, propelled Neighbours into the hearts of a nation’s teens and caused Alison Grade to miss double biology. But this unforgivable piece of Stalinist revisionism shamefully erases the unparalleled contribution of Dr Clive Gibbons. Thanks to his freewheeling attitude and Simon Parkin hair, it was Clive who the kids tuned into see, long before Scott fretted about flunking his HSC. He called his car Bertha. He raised the ire of Max Ramsay with his zany gorillagram agency (although practically everything somehow aggravated Max, whose contract specified he had to storm around in a vest at least once in every episode). He organised a pancake contest at the coffee shop. And he joined forces with Max’s son Shane to form RAGGS – the Ramsay And Gibbons Gardening Service. They didn’t just fling these scripts together, you know. But Clive’s finest 25 minutes arrived when Lucy got stung by a wasp and couldn’t breathe. Armed with just a ballpoint pen, Clive performed an emergency tracheotomy on the Robinson kitchen table to save her life. Don’t hold it against him.

2) LUCY ROBINSON FALLS DOWN A DRAIN

The original Kylie Flinker issue Lucy clearly endured numerous scrapes in the early days, not least when she plunged down a sewer in pursuit of her missing terrier Basil. Robinson Jnr remained trapped in this chasm for days, the outside world oblivious to her adenoidal pleas for help. Eventually freed, Lucy nevertheless temporarily lost her sight as a result of her subterranean ordeal. However, once it returned, Lucy duplicitously pretended to be still blind, as a ruse to distract father Jim from a blossoming relationship with one of his many “lady friends”. Lucy’s comeuppance came when the unfortunate Basil later drowned at the beach, despite Mike’s best efforts to rescue him. Lucy was later packed off on some kind of finishing school grand tour of Europe while the character was being recast, an event that provided plentiful ammunition for the likes of Tina Baker and Alison Graham to make endless remarks about “but why hasn’t anyone noticed her face has changed?”

First spied cavorting in her scanties as a stripper at a Ramsay Street “bucks party”, Daphne Lawrence soon became a reformed character and flitted between the duelling lotharios, Des and Shane. Ensnaring the affable bank manager with her patented recipe for lemon chicken, she agreed to marry Des, only for their nuptials to be halted as a bank robber hijacked her car. Fortunately, the couple did belatedly make it down the aisle, only for Des to strain his back carrying her over the threshold. She ran the coffee shop at Lassiter’s, became a mother figure to brooding leather-jacketed pin-up Mike and even befriended Des’s scatterbrained mother and all-time greatest Neighbours character Eileen Clarke. But the tao of Grundy ensures that no character can be afforded prolonged happiness before the melodramatic incidental music kicks in sooner or later. Left in a coma after a car crash, Daphne opened her eyes one final time to utter a final “I love you, Clarkey” to Des, before suffering a cardiac arrest and dying. The nation wept over its Crispy Pancakes.

4) JANE HARRIS TAKES OFF HER GLASSES

One of the great legends of celluloid states that there are only seven stories, told and retold through the generations. Nobody’s quite sure what the other six are, but we do know that one of them involves a plain, bespectacled, bookish female removing her spectacles to be transformed, swan-like, into a ravishing beauty. Right from the moment Plain Jane Superbrain moved into Ramsay Street to lodge with interfering nan Mrs Mangel, we could see that at some point this plain, bespectacled, bookish figure would, at some point, be removing her spectacles and, well, you get the picture. So it transpired that, with her heart set on a tryst with “spunk” Mike at the annual Erinsborough High shindig, the neighbourhood “dag” underwent a makeover at the deft hands of Daphne and Helen and, yes, took off her glasses. From that moment there was no stopping Jane, as the blonde temptress embarked on a career with the Daniels Corporation and even had a brief fling with Scott, the minx. The quiet ones are always the worst.

Every Neighbours obsessive knows that the show began on Channel Seven in Australia before being axed, only to be audaciously revived by the Ten network a few months later, prompting a whole new set of opening titles. The original sequence had been a primitive reel of footage featuring Max looking over his fence and Paul Robinson dressed as a baby. The new era brought a complete overhaul, each episode now heralded by a whimsical tableau involving a Robinson family cricket match that ended in Paul hitting the ball through Madge’s window. Now, as characters came and went, they re-edited the titles to keep pace with the cast, even Bouncer getting in on the act eventually. But the best was yet to come when the cricket was replaced by a poolside Ramsay Street barbecue. Scott and Charlene now hurled a beach ball at shaggy loafer and resident comic foil Henry Ramsay, who promptly fell backwards into the pool. The combination of Andy Crane’s teatime introductions (“Now it’s time to meet those antipodean… Neeeeeigh-bours!”) and this iconic image came to somehow represent imperial phase Neighbours. It even survived the departures of Minogue and Donovan, the beach ball lobbing duties now falling to Bronwyn and the annoying Sharon. But shamefully, when Craig McLachlan jumped ship for Summer Bay, they kept the falling in the pool bit, but now with Matt Robinson. Things, it was clear, would never be the same again.

The hub of the Erinsborough business community was the shadowy Daniels Corporation, a blue-chip international conglomerate boasting financial interests in Hong Kong, New York and a small-scale chauffeur operation, operating from a cramped office in a suburb of Melbourne. Led by the thrusting, unscrupulous, double-dealing tycoon Paul Robinson, it had frequent dealings with mysterious Japanese businessman Mr Udagawa. They used to go on about him a lot. It seemed that, with a crucial deal hanging in the balance, Mr Udagawa prized family values and favoured doing business with married men. Enter Gail Lewis, secretary and old flame of Paul, who married him in a shock ceremony that amazed their unsuspecting friends and family, not least Gail’s dad Rob Lewis, Erinsborough’s leading jalopy-racing mechanic. Impressed by Paul and Gail’s charade, Mr Udagawa signed on the dotted line and inevitably Paul and Gail’s marriage of convenience became the real thing. Perhaps the couple’s finest moment came during the cast’s ensemble performance at the 1988 ROYAL VARIETY SHOW, where Paul greeted Gail’s entrance with the immortal line, “I didn’t hear a Gail warning!” Oh, and Fiona Corke’s wardrobe was by Kamizole. That’s very important, that.

7) THE FAMILIES FEUD OVER THE STREET’S NAME

The eternal jousting between the ancestral houses of Robinson and Ramsay fuelled plenty of storylines in the early years of Neighbours, the infuriatingly righteous Jim Robinson clashing frequently with the laidback Max Ramsay and his clan. The feud ignited once more when Scott discovered that it wasn’t Erinsborough pioneer “Black” Jack Ramsay after whom the street should have been named, but Jim’s grandfather, who had been cheated out of the honour in a card game. Todd and Katie escalated the hostilities by changing the street sign to Robinson Street. Scott and Henry resolved to settle the dispute in another game of cards, Henry upholding the Ramsay family’s honour by winning, thanks mainly to Charlene fiddling the cards.

Mrs Mangel’s husband Len was one of the great unseen characters of soap, until Neighbours ruined everything and he turned up during the nineties. But on one occasion, a bizarre chain of events led to the Erinsborough super snoop mistakenly believing that he had died, resulting in her attempting to commune with him via a rosebush, as a rumour swept Ramsay Street that she had killed him. Mrs Mangel had fallen off a ladder and lost her memory, forgetting that she had been divorced from Len. Jane tried to avoid upsetting her nan and told her he had gone away on business, but things got out of hand when Mrs Mangel noticed all of Len’s clothes had gone and insisted he must have died. Meanwhile, Bouncer had unearthed a bone at Lassiters, prompting the residents to suspect her of murder. Mrs Mangel then said she had to see Len’s grave, so Jane continued to play along and told her that he’d been cremated and his ashes scattered under the rosebush in the garden. Inevitably, Mrs Mangel started chatting to the plant, to the bemusement of her suspicious neighbours.

9) BOUNCER HAS A DREAM

Neighbours has a rich tradition of dream sequences. The first was the surreal Christmas fantasy that Clive envisaged after he was accidentally knocked unconscious while refereeing a boxing match between Mike and Shane, in which Charlene became some kind of clockwork doll, Paul was an evil moustache-twirling baddie and Mike and Shane became Tweedledum and Tweedledee, while Clive himself was Santa Claus. But nothing before or since could quite match the genius of the episode when the screen gradually dissolved into Bouncer’s dream, in which Ramsay Street’s super intelligent mascot hound imagined himself in a bow-tie marrying Rosie, the dog owned by Dorothy Burke’s alcoholic father, before the happy couple were depicted in a kennel surrounded by lots of little Bouncers.

The tradition of pop star cameos in soaps is not a glorious one. Robbie Williams in EASTENDERS. Noddy Holder in CORONATION STREET. It’s a story littered with embarrassment and discomfort for everyone involved. The omens then were not auspicious when Sir Chris Lowe of the Pet Shop Boys agreed to appear in Neighbours in 1995. Essaying the natural brand of acting he’d exhibited in It Couldn’t Happen Here, Chris screeched into Ramsay Street in a white Porsche convertible, perhaps in homage to the BBC video for I Should Be So Lucky he’d enthusiastically endorsed years before. “I’m a little lost,” he informed Helen Daniels and Marlene Kratz, “I’m looking for a recording studio which is round here somewhere.” Exactly why Neil hadn’t told him where it was isn’t clear, but Marlene soon put him right, not before Helen had perceptively deduced he was from England and in a band. “Yeah, the Pet Shop Boys.” “I’m sure you’re destined for big things one of these days,” replied Marlene. Chris drove off in search of the studio, as Annalise scampered into the street to discover the identity of their star visitor. “Some band from England, er, the Pet People,” replied Marlene, obeying the law of soap which decrees that anyone over the age of about 30 must be totally confused by pop culture to “humorous” effect.