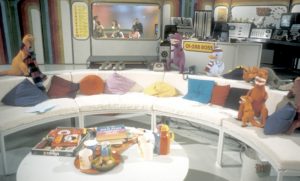 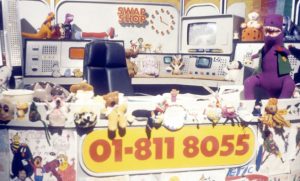 SUBLIME HERALD of the weekend, forever jostling with TISWAS for Saturday morning supremacy, and the best thing EDMONDS has ever done. Everyone knows what this was all about, but the real stroke of genius was giving kids the chance to phone up and talk to the stars. Seems obvious, yet it was fantastic, and for some reason nobody does it anymore. Noel’s comrades were, of course, KEITH CHEGWIN (“He’s packed his bags and gone off with a knowing look – could he be near your place today?!”), MAGGIE PHILBIN and JOHN CRAVEN, along with Posh Paws (Stilgoe-esque anagram of Swap Shop) a purple felt dinosaur with poorly-articulated jaw that did a feeble “roar” whenever some sappy viewer sent him in a homemade waistcoat, and a stuffed toy sheep moved up and down by a crouching Craven. Plus ERIC who operated the TOTP-themed plastic sphere-on-a-string with the competition answers (and got own feeble awards named after him). Edmonds was in full bloom here: shouting, fooling around, obsessing over gadgety stuff, putting callers at ease, chatting amiably with a thousand guests, joking with the crew, and generally making the show a great place to hang out of a morning. Everyone involved seemed to have a great time, and hence you felt the same. Two theme tunes: the first went “SWAP SHOP! Daa-da-da, da-da-da-da, daa-da-dadadadadadadadada-daaaa!” over a squiggly “morphing” animation of the logo; the second, by BA “Kaftan” Robertson, had a sort of steel bandish effect and went “Hello, hello, hello, hello, hellooooo!” a la Smells LIke Teen Spirit. “Offers: Scalectrix (note spelling) 200 track and cars. Wants: Anything to do with Hazel O’Connor.”