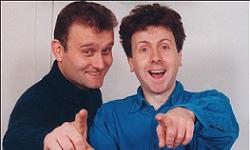 ADMIRABLE attempt at pre-watershed sitcommery from the satirical pens of STEVE PUNT, HUGH DENNIS and NICK HANCOCK, co-writers and co-starring as old schoolfriends brought back together. Hancock’s character (a PE and English teacher who supported Stoke City, natch) owned a flat which Dennis’s character (an arrogant, suspicious business tycoon-in-waiting) comes to stay in while Punt’s character (the brainiest of the three but preferring the drop-out life) keeps popping round after arguing with his parents. Some needless rehashing of old stand-up scripts (“when I got my kidney donor card I put Colin’s name on it”) aside, it was hardy stuff that did better than hobble along though as ITV sitcoms go, it was hardly anything that would threaten the crowns of Rupert Rigsby or Robin Tripp, and wasn’t recommissioned. The scrumptious ADIE ALLEN, in sober suit jackets and jeans, played the love interest Claire (“I loved the things you did to me – like taking me to the National Portrait Gallery…”) while DANNY BAKER, a big mate of Hancock’s, appeared as himself, flogging an ‘unbranded’ soap powder. Best bit was getting a gag about the demise of ELDORADO in, even though it had only happened that very week, suggesting a tight and topical filming and editing schedule. The dream sequence (“are you in my dream or am I in yours?”) in the last episode, in which Hancock smashed up a car with a baseball bat while Claire declared undying love for the other two, was one of the most complicated plotlines ever. Like most things Punt and Dennis have done, it will never be seen again but is somehow better off for it.