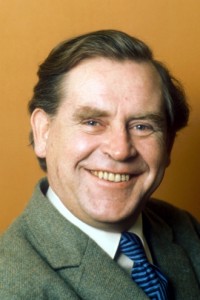 THAT FAMOUS theme tune was called “Approaching Menace”, but we reckon it should have been “Fanfare for the Common Man”, as this teatime slice of austerity was television’s greatest ever platform for spod-u-likes and nerd-do-wells. Never before had an obsession with Polish pottery circa the 1930s been so richly rewarded. Presiding over the interrogation was fearsome question master MAGNUS MAGNUSSON, a man of gravitas and oft-spoken Nordic roots. His famous catchphrase “in my homeland of Iceland” featured less in MASTERMIND than most programmes in which he appeared, but he still made for a memorable, if overly formal questionmaster. Ironically, given the show was broadcast from a different educational institution each week, MASTERMIND’s most iconic element was its stark “set”, catalyst for many sketch-based “started so I’ll…” chicaneries. Most remembered champs are, naturally, men of the people: cabbie FRED HOUSEGO and engine driver CHRIS HUGHES. Latterly revived by the peerless JOHN HUMPHRYS.