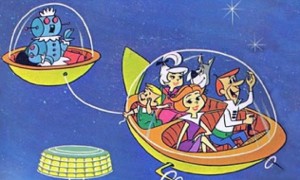 RAUCOUS BUG-EYED rompery of the fourth dimension. Basically, THE FLINTSTONES in space wherein, as earnestly enunciated in the noisiest cartoon theme tune ever, we were invited to “Meet George Jetson” (repressed mithering henpecked put-upon and employee of Spacely Space Sprockets), “Jane, his wife” (shopping-obsessed bouffon-sporting harridan), “his boy Elroy” (squawking nine-year-old pain-in-the-arse geek) and “daughter Judy” (wayward teenager with a penchant for space jive). Much stock H-B over-dubbed audience hysterics at the video phone not working, or Elroy getting stuck down a pneumatic tube, or the Foodarackacycle speeding up and splattering moon cheese over George’s moon face. There was dog called Astro voiced – identically – by the bloke who went on to do Scooby Doo, while Jane was voiced by the woman who was simultaneously doing Wilma Flintsone. MEL BLANC was involved too, as Cosmo G Spacely (clearly a memo had gone round underlining the importance of using the word “space” as many times as possible). Not bad for its time, though always liable to leave the sensitive of hearing in temporal time-space shock. Rubbish remakes got churned out in 1985 for no reason, ditto a big screen version.