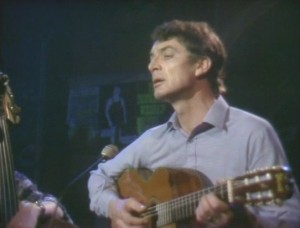 LANKY LACONIC Yorkshire yokel gets long-overdue opportunity for his own headlining effort outside natural habit of the ‘guest slot’. A regular sight in the musical bits of TV shows since the mid-sixties, droll folker Thackray was much beloved of audiences due to a winning combination of risque wordplay, broad social lampoonery, deft deployment of ‘thicko’ linguistic inflections, athletic feats of circumlocution, translations from the original Brassens, simultaneously highbrow and lowbrow puns, and, of course, that hangdog expression and browbeaten ‘everyman’ persona. Jake Thackray & Songs involved him performing a handful of numbers each week to an audience-ful of racuous guffawers, with rambling witty introductions which – it has to be said – were often longer than the songs themselves, while hardcore folkie pals like Maddy Prior and Alex Glasgow turned up to inject a note of more straight-faced torah-lorah-ing. Frank-talking racism satire One Of Them and abundant use of the obvious profanity in boss-berating The Bull got a few mouth-frothing letters catapulted Points Of View-wards, but apart from that it was a straightforward stroll through your Family Trees, your Brother Gorillas, your Poor Sods, your Country Buses, your Castleford Ladies’ Magic Circles and all the other favourites, and it doesn’t come much better than that.

Related Items:"...and furthermore you're not supposed to 'ave your finger in that there 'ole", 1981, An 'intimate revue' not quite captured on tape, BBC2, Brother Go-ri-i-i-i-i-lla!, Jake Thackray, Lolloping wordplay
Share
Tweet
Share
Share
Email