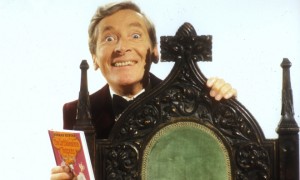 RAMSHACKLE READING-IS-FUN RELIC wherein a Famous Person would sit on a chair with a pretend book and ponderously recount the contents of your local mobile library. Everyone who was anyone had a go, and everyone saw it. LEE MONTAGUE raised the curtain courtesy of a handful of fairytales in ’65, and ALAN BENNETT took the final bow with The House At Pooh Corner 31 years later. Along the way king of ubiquity was BERNARD CRIBBINS who turned in 17 tales, closely followed by KENNETH WILLIAMS on 12. Numerous Dr Whos looked in, namely PATRICK TROUGHTON, JON P’TWEE, TOM BAKER, PETER DAVIDSON and SYLVESTER MCCOY, as did future nobles of the realm JUDI DENCH and MAGGIE SMITH plus “resting” actors JEREMY IRONS (various Paul Gallico yarns, 1982), PATRICK STEWART (Annerton Pit, 1977), IAN MCKELLEN (The Moon in the Cloud, 1978) and HELENA BONHAM CARTER (The Way To Sattin Shore, 1991). Elsewhere Scots artist JOHN GRANT upended the format by drawing his stories of caveboy Littlenose live in the studio, ditto QUENTIN BLAKE and The Adventures of Lester. INSTANT SUNSHINE went out on the road to Search For The Source Of The M1, while GEORGE MELLY a-bipped and a-bopped his way through Tales From Beatrix Potter. The less said about those viewers-competition-winning-stories the better, likewise PRINCE CHARLES mithering on about the Old Man Of Lochnagar. Brought back in all but name by CBeebies, then with name on BBC1 in 2006.