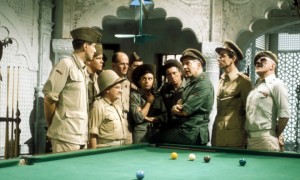 SIMPERING SITCOMMERY involving a single studio set standing in for the entire British World War Two Indian subcontinent campaign and two million shit gags standing in for pithy punchlines, enlightened witticisms and well-crafted tomfoolery. Like DAD’S ARMY, went on for longer than the war it was supposed to be fucking lampooning, and contrived to do so in a noisier, more over-stated fashion as well. WINDSOR DAVIES bellowed his way through proceedings helming a platoon of various comedy gay soldiers including dragged-up MELVYN “GLORIA” HAYES, pintsize kit factory DON ESTELLE, STUART “PLAY SCHOOL” MACGUGAN, GEORGE LAYTON and JOHN “MR LA-DI-DAH GUNNER GRAHAM” CLEGG, plus the requisite number of thick/aloof officers and pretend Asians. More offensive than LOVE THY NEIGHBOUR, less funny than EDGE OF DARKNESS, less credible than AROUND THE WORLD WITH WILLY FOGG.