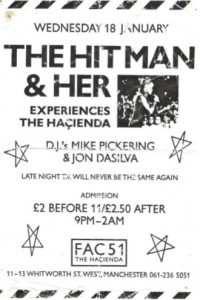 ALMOST UNIQUE nightclub-based Saturday night marathon passing quickly into pub-bound TV legend. At the “helm” were eighties Hit Factory svengali, railway buff and future unofficial Music Tsar of Great Britain and Northern Ireland, PETE WATERMAN, together with ex-Wide Awake Clubber MICHAELA STRACHAN. Invariably broadcast from dress to impress, ladies free B4 11pm-type nitespot, usually Mr Smiths in Warrington. Exactly what was supposed to be gained from broadcasting extensive footage of gawky moustachioed northern chancers (including, tellingly enough, about half of what were to become Take That) dancing appallingly to SAWs Packjammed With The Party Posse, with a live PA from The London Boys if you were lucky, is unclear, and now looks rather like a folly. Still, Pete always treated the occasion with the spirit, if not the spirits, it deserved, and always wore a sober suit while Michaela did her honour-bound best to get some sense out of the baying hordes.