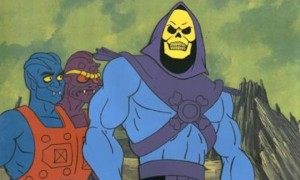 PISH TOY-FLOGGING sword and sorcery cartoon. In “Eternia” blonde tosspot Prince Adam holds aloft his magic sword, says “By the power of Greyskull!” (half-arsed castle nearby) and turns into He-Man, shirtless Anna Wintour-bobbed preening oaf in strange man-bra-like support singlet. He’s accompanied in his hazily realised evil thwarting by stupid green tiger Cringer, who, while essaying a crap impression of the cowardly lion off of The Wizard of Oz, turns into “Battlecat”, a collision between an off-colour tiger and a Kawasaki motorbike, emitting the MGM lion’s trademark roar at distressingly regular intervals.

Animation rarely reached the lofty heights of “will this do?”, most often settling for a combination of stationary head-plus-wobbly mouth exposition, or suspiciously side-on, traced-from-those-old-Edweard-Muybridge-Victorian-photographs running cycles. “I have the power”… to fill the schedules with ambition-starved macho pantomime cack. If fantasy is supposed to be the dominion of the untrammelled human imagination, how come so much of this sort of stuff all seemed the bloody same?