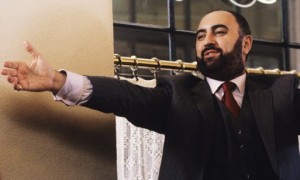 THE EEC, eh? What a bunch of paperclip-filing, expense-filling winos. So said MALCOLM BRADBURY in this of-the-moment glossy gallivant around the plazas and piazzas of Brussels where talk of Ecus and ERMs flowed as freely as money-stuffed paper bags and bungs, and who were we to know any better? Dapper satire at its best, with CHRISTOPH WALTZ as Hans-Joachim Dorfmann who arrives at the made-up Directorate of Information and Culture full of Hacker-esque naive idealism only to find IAN RICHARDSON-orchestrated chicanery at full pelt involving shady ladies, kickbacks and the European plum mountain. Subsidised-halcyon days indeed. JUDY PARFITT was Ian’s wife, ALEXEI SAYLE played himself (i.e. a shifty East European oik spouting bollocks). Sequel set in fictional newly-liberated Eastern state of Slaka with all principal protagonists still up to no good.