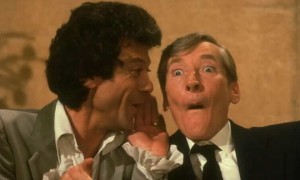 NOW WE’RE talking. Or not, for fear of eliciting a petulant parb from Asp or Parky’s buzzer. The ultimate in parlour game riddle-me-ree telly, this served many a purpose during its celebrated reign, not least a) filling half an hour on the cheap b) keeping Parky in work after he sulked out of TV-am (not necessarily a good thing) c) keeping any number of equally jobbing light entertainment lackeys in the public eye, or at least in the early afternoon public eye, and d) having the most dementedly overlong here’s-how-the-whole-thing-works theme tune ever. Plus it proved ample inspiration for something to fill dying minutes of last-day-of-term school pissabouts. Original line-up had MICHAEL ASPEL bedded down behind cosy desk “keeping order” as TV Times always used to say over UNA STUBBS and LIONEL BLAIR, who in turn had ostensible jurisdiction over fellow contestants comprising defiantly D-list celebrities and members of the public. Later, more long-running roster comprised MICHAEL PARKINSON in a sweater behind a giant bureau, with LIONEL on his left and LIZA GODDARD on his right supported by a celeb-only back-up. Original theme (Chicken Man, aka GRANGE HILL) also ditched for inordinately long exposition in close harmony singing: “..with Mi-chael Par-kin-son (shot of Parky looking shifty)…Liza God-dard (shot of Liza looking sassy)…and Li-onel Blair! (shot of Lionel looking hyper, mouthing “Hello!” at camera)”. Captains would also introduce fellow comrades during the song. “And on my team today,” cooed Liza, “Maureen Lipman, Janet Brown and Rula Lenska!” “While on my team today,” minced Lionel, “Christopher Biggins, Bernard Cribbins and Brian Glover!” Host would then beckon member of team up to the desk to proffer title of book/play/film etc., displayed on screen for those “not playing along at home”. 90 second or less on the clock. Mime beings. Veterans, especially Lionel, prone to exaggerated slapping of splayed fingers on forearms and pressing of nose-ends when guess was correct. Guess followed by a bonus “When was it made? 1968, 1969 or 1970?” question in which Parky always directed the girls team to the correct answer in a misguided act of chivalry. Amusing 25-word “bit of fun” offering always doled out to Lionel at end of every show. “You swines!” Obligatory changing of seats with each round completed picture of cosy bonhommie, sadly missed.