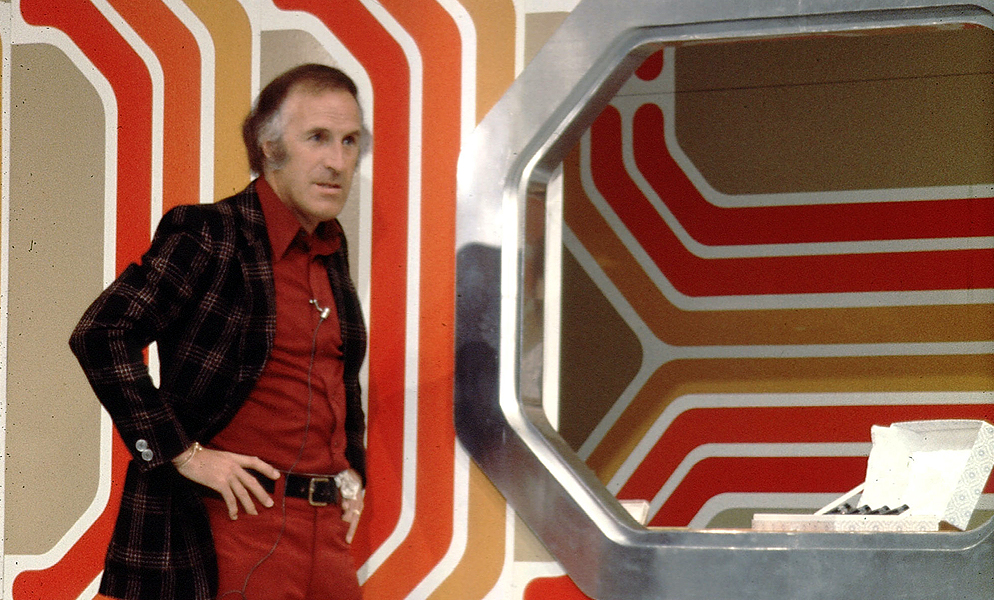 QUITE SIMPLY, one of the finest programmes ever ever made. The jewel in small screen’s light entertainment crown, this was absolutely essential viewing for, hey, a generation, and anyone who thinks otherwise ought to be tied to a conveyor belt for eternity, preferably one moving through a never-ending Jim Davidson stand-up routine, whose tenure at the helm of this institution we’re obviously not counting because a) he fucked up all the games b) he had fucking Mr Blobby on every week c) he fucking gunged the contestants at the end and d) he was just fucking shit.

PART ONE: THE BRUCIE YEARS. “Life,” croons Bruce, “is the name of the game, and I want to play the game with you.” Sequence of stills show our host pulling variety of comedy faces (mock-horror, mock-shame, mock-amusement). Curtain rises. Brucie strikes “thinker” pose at back of stage then shimmies towards camera. “Ladies, gentleman, children, nice to see you, to see you…” Gags about weather/what’s on the other side/old woman in front row before ANTHEA REDFERN comes on in a giant smock (“Give us a twirl!”). Two pairs of contestants ushered into shot (mother and son-in-law; old man and daughter). Bruce interrogates them in a manner to imply they’re idiots/drunks/both (“I’ll just make a note of that”) with much wry aside glances to camera. “Watching” game ensues, involving contestants identifying mystery objects/people/places. Answers recorded on giant clipboards. “I’ve got ‘Richard Baker’ written down here!” “Doing” game follows, involving contestants observing demonstration of ludicrously difficult vocation (pottery making, formating dancing, campanology) then copying it. Bruce joins in to further imply contestants stupidity/score more easy gags, but hey, “didn’t they do well?!” Next, the playlet, wherein contestants assume famous historical roles in comic pageant co-starring Bruce and surprise celebrities. Contestants never able to deliver lines properly, despite script in front of their nose. Celebrities screw up and interrupt Brucie. “I’m in charge!” he howls. Finally, conveyor belt memory test for winning pair: steak knives, plate warmer, teas-maid, cuddly toy etc. “The decanter, don’t forget the decanter.” Audience blatantly shout out answers. Then everyone – and that’s everyone, including all earlier formation dancers/pottery throwers, plus complete haul of prizes positioned on giant display stands – return to wave at camera while Bruce promises to see us all again next week. Roll credits and extended theme (“life can be terribly tame…”).

PART TWO: THE LARRY YEARS. It’s 1978. With Brucie off to ITV for his Big Night, Beeb cast around frantically for a replacement. Genius idea forms to pick someone the polar opposite of the Forsyth saga. Call goes out to Lal, who casts frantically around for his spectacles, packs his best beige three-piece suit and heads for BBC Television Theatre. Theme tune gets stylish makeover: “Shut! That! Door!” chirp close harmony choir, “and enjoy the Generation Game/What’s in store?/The best of relations is our aim!/Larry Grayson is heeeeere to play/soooooooooooooo….” Larry interrupts. “Shut that door!” Second “Lal” theme kicks in (“Der da da der-der, der da-da da-da der-der”) as host leaps through false frontispiece. Meaningless anecdote follows (“I said to Everard, you don’t want to put it out in this weather”). ISLA ST CLAIR (“My very best girl”) sashays on to keep things ticking over. Lal spends next 50 minutes mithering and mooching, while Isla ensures games actually take place. “Scores on the doors”. Celebrities turn up for no reason (usually Rod Hull and Emu). Contestants try hand at “doing” game. Larry tries and fails. “What a gay day!” Contestants try hand at “watching game”. Larry tries and fails. “Ooh, I’ve come over all queer.” Celebrities appear from behind sliding doors. Musical-based finale sees contestants having to become instant ballerinas/morris dancers/snake charmers. Winning pair decided by half-arsed yes or no trivia question. Conveyor belt. “Now keep thinking, keep thinking.” Contestant sits in giant wicker chair. “The music centre, don’t forget the music centre!” Audience blatantly shout out answers. Then everyone returns to bid goodbye and wave throughout extended theme (“That’s! Your! Lot!”).

EPILOGUE: Show dumped in panic at success of GAME FOR A LAUGH; revived brilliantly in 1990 with all flags flying (Brucie, Rosemary Ford, celebs, playlets, Bruce teaching the nation how to do the lambada).