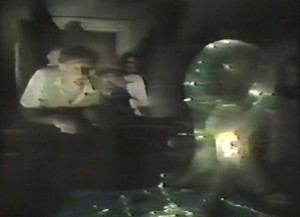 WELL-REMEMBERED comedy edition of the usually straight and serious ITV PLAYHOUSE strand, co-written by JOHN “CLIFFY” RATZENBURGER. Retired professor ROBERT STEPHENS leads the Friends in Space Society, a harmlessly eccentric bunch of binocular-toting, long wave-trawling suburban UFO nuts (including Ratzenberger, ELEANOR BRON, TERENCE ‘SOFTLY, SOFTLY’ RIGBY and PAT HEYWOOD) who, inevitably, happen upon a genuine alien (resembling a translucent half-jellyfish, half-lampshade, half-man thing) which they rather brilliantly name The Nigel. The rest of the play works out as a sort of EXPLORERS in reverse, as they determine their ‘Nigel’ is just a kid, revert to suburban type, and try and get in touch with its parents to fetch him home, making for the most mundane alien encounter ever filmed.