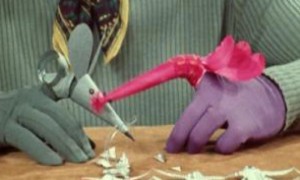 CHEAPO HIPPY puppetahon courtesy of one-man creative maelstrom (see MAELSTROM) RICK JONES, aka Yoffy. Our host would sit a trestle table in grey poloneck in front of minimalist blue background and proceed to converse with various characters he’d devised from gloves and pieces of card and ping-pong balls. In other words, Yoffy lifted a finger, and a mouse (Fingermouse – rapid, self-absorbed grey upstart – “Fingermouse/Fingermouse/I am a sort of wondermouse/A hit, a miss/A blundermouse/Fingermouse, that’s me/I am a mouse called Fingermouse/A mouse with guts and nerve/I get past cats so easily with my famous body swerve”) was there. Put his hands together, and a seagull (Gulliver – tuneless singer, least popular character – “I like to flyyyy/And spread my wiiiiings/Above the rooves and trees/And then to gliiiide down/Down onto the sea/Fold my wings behind my back/And float just like a boooooat…” or something) took the air. Yoffy lifted another finger, and a scampi darted about (“My name is Scampi/Scampi that’s me/I live in a hole in the sand/By the sea-eeee!” – constantly cooing to its five camp and glittery cohorts “Oh girrr-rrlls!” played by the five fingers of Jones’ spare hand). Yoffy bent another, and a tortoise head peeped out (Flash – “Slowly/Steadily/Moving at my own pace/They call me Flash/Though I don’t dash/Who wants to run a race?/As long as I get theeeeere/Why worry?/What’s the hurry?/Uuuuuuuuuuhhhh….”), a narcoleptic version of Magic Roundabout’s Dylan, “special shell” detatched for carrying stuff. Then they all went off to collect stuff for use in the story at the end. As usual, the journey was better than the arrival. Cost an average of fifty pounds an episode. Recession-beating genius!