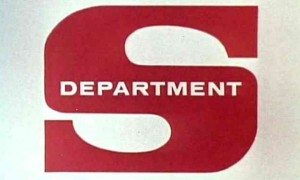 ORIGINAL WAS a top MISSION: IMPOSSIBLE UK-style Bentleys and fist-fights spy thrillah, with JOEL FABIANI, ROSEMARY NICHOLS and most importantly PETER WYNGARDE, a long-time swarthy baddie in THE SAINT who mutated off into JASON KING. Crazy big band music and seventies graphics, fingers on typewriter keys, etc. King was chief investigator of Department S, the branch of Interpol which specialised in solving unsolvable cases. His other pastime was writing detective fiction featuring a character called Mark Caine, whom King used to pretend to be to help him solve the cases. Long hair, droopy ‘bandito’ moustache, King was a vain, seventies playboy who wore clothes only Noel Edmonds would wear nowadays (and does) and managed to irritate his fellow detectives with his unconventional antics. Thanks to this programme Wyngarde became the most popular man in Germany. Viewers fed up with Roger Moore’s Saint kicking the giblets out of up to three blokes at a time then straightening his tie with not a hair out of place, were charmed into this one because King always got the boot in the baddie’s face first, but invariably he was given a good hiding and passed out artfully reaching for a fag or some brandy. Baddies were identifiable by their short-back-and-sides. Swilled brandy, wore frilly shirts, kaftans, and eau de cologne; quite an admission in those pre-Brut days. Entertained glamorous but oddly sexless women (they all were then, except FELICITY KENDAL who appeared as a young Frenchwoman). The spin-off concentrated even more on the debauched and hedonistic lifestyle of our hero who by this time was a freelance, with an even greater selection of implausible plots in glamorous locations (how many times has that panoramic view of Monte Carlo been used?).