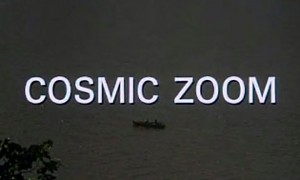 …AND SO we come to this, made by the redoubtable [cref 896 NFBC], and re-done by IBM-affiliated heads a few years later, it nevertheless instantly caught the eye of anyone watching. BLUE PETER showed it once, PICTURE BOX several dozen times. Immensely memorable all the same. Produced by Charles and Ray Eames, it was originally an animated film which started with a (real-life action) shot of a boy rowing over a lake. The picture freezes, and the camera “zooms” (you see?) in on the boy’s hand, sitting on which is a mosquito. We go past the mosquito and under the skin, right through the blood vessels and into the atomic structure. Then we slow down and come back out the other way. But the reverse-zoom doesn’t end with the lake, it goes on further, showing the whole of Canada, the globe, the Earth as a planet within the solar system until we see the Milky Way. Then we stop again and zoom back in until we’re back at the boy on the lake. Then it melts back into live action and the boy carries on rowing, blissfully unaware of the mind-altering hallucinogenic experience the rest of us have just undergone. Indeed.