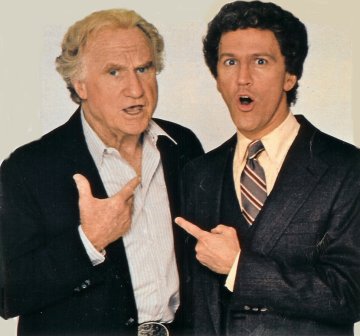 ULTIMATE evolutionary manifestation of the Yankside eighties trend for blaring-brass-theme-tuned big-budget action showpieces with a bit of ‘quirky’ detective hoo-hah thrown in for good measure, with nervy lawyer Harrison Fox (John Rubenstein) invariably roped by loose cannon detective father Harry Fox (Jack Warden) into suitably ‘crazy’ crime-solving, usually involving comical ‘let’s get outta here!!’ chase sequences and so forth. A bit like Frasier, only with more dodging-exploding-boats-falling-from-the-sky. Huge popularity in Sunday night ITV homework-dodging slot led to bizarre attempt to relocate the show to England, rebranded Still Crazy Like A Fox and co-starring Graham Chapman, which ran to an impressive total of one episode.