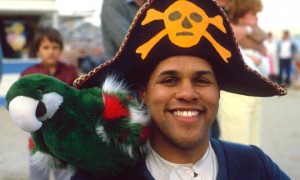 AGAIN WITH THE IMPRESSIONS. Only this time there were no saving graces. Ostensibly a fast-paced succession of celebrity-lampooning sketches and songs performed by a young team of impressionists, the sheer consistent lack of quality of Copy Cats left an almost indelible mark on Saturday evening schedules. Kevin Turvey in 1987! Rowan Atkinson’s shouty-man-in-audience character in 1985! Joan Rivers all the time ‘cos there’s always someone that can do her! “Cats” consisted of constantly-churning musical-chairs-style list of mimics, right from stars like BOBBY DAVRO (all voices sound the same) and GARY WILMOT, through MARK “ROY” WALKER, MIKE “JIMMY CRICKET” OSMAN and stalwart double-act AIDEN J. HARVEY & ALLAN STEWART, all the way down to HILARY “JOAN RIVERS” O’NEILL and, inevitably, ANDREW O’CONNOR. First series prefaced with cartoon/balloon-y font depicting title, with “wine-bar” font version twiddling about in the corners then tight-close up on each goon’s face. ’86 saw cheeky comic character antics as the “comedy crew” morphed out of made-up “Copy Cats” comic, each adopting a knockabout image of themselves but “disguised” as a real celebrity or character, all except CHERYL TAYLOR who bizarrely emerges in the form of the Queen of Hearts (true!). Change of tack from herein, with capers discarded in favour of upbeat lyric delivered by the “comedy crew”, dressed in white DJs or full-on ballgowns, hilariously perched on bar stools and marooned on that LWT stage (shot pans round semi-circular formation as they sing the toe-curling tune – “Copy Cats! The comedy team! They’re never quite what they may seem! They look at life in slight-ly diff-rent waaaays!”). This relaxed-but stiff tactic was a hangover from the early closing sequences, which seemed to go on for 20 minutes and had the ensemble singing either that song or tiresome others, but stopping all the time to have the chosen “cat” deliver another poor impression. O’Connor did Turvey, Davro did Duncan Norvelle, Stewart always did Frank Carson (“This is Frank Carson, News At Ten, Westminster. It’s a cracker.”). Later incarnations were tighter, but still ruined by that damn song and raising-of-the-arm on the last long note.