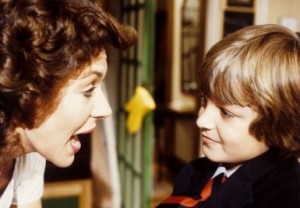 ADAPTED FROM John Wyndham books that nobody read, this was the story of various “quiet” children who came into telepathic contact with a geometrically-shaped alien resembling those computer bits in The Demon Seed, which then promised unlimited energy or something. Inevitably, nasty grown-ups wanted to exploit it. ANDREW ELLAMS played the (gasp) middle class kid. ED BISHOP, MRS JAMES HERRIOTT and that one from THE BOX OF DELIGHTS looked in. Much namechecking of Atari games consoles and Rubik cubes. Doddery aunt character called, by law, Aunt Cissie.