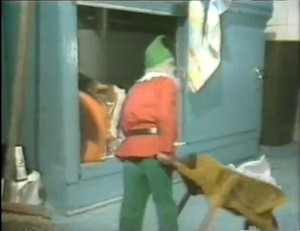 More weirdness from that mid-’80s period when CITV tried to steal a march on its freshly-Broom-Cupboarded-up rival by commissioning the first thing that came into the various regional studios’ heads. Here was Central’s rummest contribution to the bonkers Year Zero effort, a tale of two gnomes who live in the backyard of a fish and chip shop (hence confusing title) and pledge, by ‘The Code of the Gnomes’, no less, to help anyone with a problem who comes along, which was often. This strangely affecting do-good moral malarkey made rather good use of outsize sets to suggest a mountainous backyard, and good old TONY AITKEN, who was barrow-pushing gnome Mr Wheeler to MIKE ‘KEN off of CITIZEN SMITH’ GRADY’s toadstool-squatting Mr Fisher. Throw in a toy robot, a man in an outsize cat suit, a tortoise with the voice of Julie Andrews and some snigger-baiting gnomic jargon (humans are ‘big ones’, apparently), and you’ve got a weird, downbeat musical whimsyfest which was doomed to semi-obscurity from the moment of inception, but still haunts many a vague memory to this day, in a wistful sort of a way.