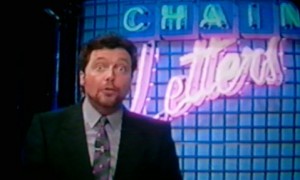 TAKE A WORD. Change a letter. Er, do it again. And you got [sic] a chain! Yup, one of the finest ever this-is-how-it-works theme tunes ushered in this linguistic wisp of a show, hosted, of course, by… “Here’s Beadle!” Our man claimed, with his usual modesty, that with this programme he invented the notion of contestants standing rather than sitting. But who are we to quibble. From within a CATCHPHRASE-esque “Wow! The inside of a fruit machine! Futuristic!”-style set, Beadlebum guided his minions through a parlour game annointed one of the centrepieces of ITV’s first ever weekday morning schedule. Ignominy came when Jeremy was replaced quickly by ANDREW O’CONNOR and a million others, at which point proceedings got terminally worse.