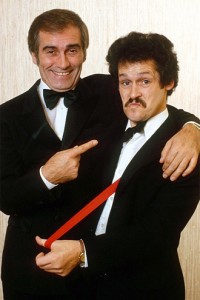 “TO BE HONEST,” they would proclaim, “the fuss that is sometimes made when we’re playing the theatres scares us. It’s like The Beatles.” The Bootleg Beatles, that is. Walking (just) embodiment of what went wrong with comedy in the 80s, now born-again Christians but still happy to lap it up at the Blackpool Winter Gardens. Enjoyed astonishing exposure off the back of amusingly failed appearances on [cref 3944 BRUCE FORSYTH’S BIG NIGHT] doing sub-sub-sub Morecambe and Wise variety with a curly-haired noisy little sod with braces (“Rock on, Tommy!”) and tall dull stooge. Own show weirdly mutated into a sitcom for a bit, then ended up – oh god – Cannon And Ball’s Casino with a young Steve Coogan cashing his chips. Not the nadir, though; that was spin-off film The Boys In Blue, done ten years after ITV spin-off films had a) stopped being funny and b) just stopped. An appearance in 2000 on  J** D*******’s Generation Game was arduous: Cannon sings song “for all the ladies and gentlemen here tonight”, Ball accompanies on toy trumpet, Cannon gets gradually more agitated with Ball’s erratic behaviour, audience sympathises with Ball… They hadn’t learned.