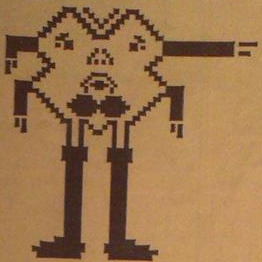 CLIVE DOIG-facilitated uber-obscure one-week-only revisitation of the old Zokko!/Outer Space-model of ‘Backroom Boys’-linked Saturday Morning programming strand, featuring Ceefax ‘presenting’ the likes of DINKY DOG, THE MONKEES, BATTLE OF THE PLANETS and for-yawn’s-sake EDGAR KENNEDY, courtesy of a quiz-setting blocky arrangement of equals-signs with the voice of Jig off JIGSAW, and Ceefaxificated renditions of the likes of Micky Dolenz and Keyop. Never again attempted yet indelibly burned into the memory of the mass bewildered.

Related Items:8-bit quizzery, A talking television set, After-the-event psychedelia, Battle Of The Planets, Bits between the programmes, Ceefax, someone popping up in the comments to tell us that Ceefax wasn't 8-bit, The BBC Schools Diamond and its cadre of fanatics, The Monkees, TVC inundated with letters from irate Fans Of The Silents
Share
Tweet
Share
Share
Email