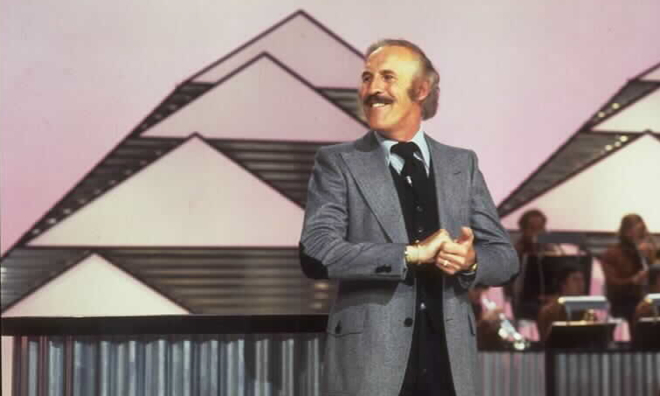 OVER TO MICHAEL PALIN for a bit of context here…

…Drive through the rain to TV Centre. Terry Hughes disappears, and some time later, when we’ve finally got the BBC video machine to work (this takes four or five people, secretaries, window cleaners etc.), Terry emerges from Jimmy Gilbert’s office and, in an urgent whispered aside, tells us that Bruce Forsyth has just signed for ITV, and that Jimmy is in a state of utter confusion and trying to write a press release.”

Yup, as part of the great Beeb exodus of 1978, Brucie followed Morecambe and Wise to ITV, leaving behind the conveyor belt and the old scoreboard to helm this massive fuck-off Saturday night varietyfest which promptly collapsed faster than a tier of Pink Floyd audience seating. Amidst the wreckage were Cannon and Ball in what was supposed to be their first major television gig, but they kept being bumped from the line-up until, presumably, the producers were convinced they’d thought up more than two gags. The operative word in this programme was ‘big’, and as such each edition was 90 minutes long. Brucie acted as a glorified continuity announcer, promising Saturday night entertainment like we’d never seen before…which turned out to be – gasp! – comedy (a revival of The Worker with Charlie Drake and a TV adaption of the Glums with Jimmy Edwards and Ian Lavender, neither of which anyone under 40 was arsed about). And then there were – yikes! – fun (the Pyramid Game with Steve Jones and Sofa Soccer, later revived on Noel’s House Party, introduced by Anthea Redfern). Plus there was – wow! – music (Sammy Davis Junior and the UK Disco Dancing Championships). Finally there was – erk! – mayhem (regular guests Pam Ayres and Rod Hull and Emu). Inevitably after a few weeks the entire population of Britain had decided to stick the now Larry-helmed GENERATION GAME, and Brucie started using each show to moan about how people had “expected glitter to come out of the set” and take up 15 minutes’ hoofing time to berate people for not watching. Soon shunted to 6pm wilderness, axed after one series and Bruce was handed his cards. Do you see what we did there?

So how did TV Times trumpet the arrival of this televisual landmark? Why, with a WORLD OF SPORT-style “see panel” sidebar all of its own, and a hastily-scribbled invitation to view, penned by some poor hack “in the style of Bruce”, of course…

“Saturday – that’s the day I want you to keep free in future. What do you mean, you do already, for shows like World of Sport? You can still watch that, my loves, and all your other favourites. I’m talking about Saturday evening at 7.25, and the show I’ve called – modestly – Bruce Forsyth’s Big Night. We’re aiming to make it the fastest moving, most fun-filled package on television. You’re going to meet international stars, such as Sammy Davis Jr and Dolly Parton. Then I’m inviting Charlie Drake along every week to repeat his success in The Worker. We’re also recreating The Glums, and the days of wireless – radio, to you. And we’ve the comedy duo Cannon and Ball. What’s that? They’ll go with a bang? Let’s get it straight – I do the gags, you join in with the games, OK? We’ve a number of those, including Teletennis and The 1000 Pound Pyramid, and Anthea is going to help me with them. Also appearing will be the poetess Pam Ayres, and Rod Hull and Emu. And as it’s a family show, we’re inviting the kids to Beat the Goalie, and to play the main roles in Doctors and Nurses, with stars as patients. As you can see, you’re going to do well, every Saturday night…no, dear, it’s not Saturday Night Fever. No, I’m not John Travolta. It’s Bruce Forsyth’s Big Night. And it’s going to be nice to see you, to see you nice!” 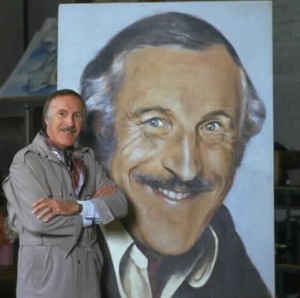