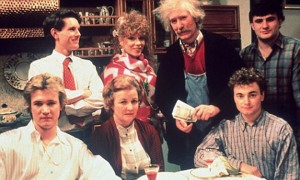 THUNDEROUSLY WORTHLESS Scouse shitecom featuring the wacky world of the Boswells, Britain’s most contrived family. Off the back of post-Yosser Liverpool national feeding frenzy, it was the toast of the nation for about 20 minutes in 1986. Lazy as fuck, every episode revolved around catchphrases and one-dimensional characters. Cue Ma Boswell (JEAN BOHT) – she said “That tart!” and “Hello, yes?”; ‘R’ Joey Boswell (PETER HOWITT) – “Greetings!”; Adrian Boswell (JONATHAN MORRIS) – “‘Angin’ by a thread! ‘Angin’ by a thread!”; Grandad Boswell (KENNETH WALLER) – “Where’s me tea?” and “Piss off!”; Jack Boswell (VICTOR McGUIRE), who turned the slightly-edgy third string sitcom character into an art; Little Billy (NICK CONWAY), perpetually kicked out of the house he shared with his girlfriend over the road, ‘R’ Aveline (at first played by GILLY COMAN before regenerating into MELANIE “SEAN BEAN” HILL, same as ‘R’ Joey); and Freddie Boswell (RONALD FORFAR), who always went “Blah blah, Nellie Boswell”. Oh, and Li-Lo Lil. Could well have been the nadir of television. Went on for bloody years. Was not a fair representation of life in Liverpool – people are usually funnier. List of cast’s subsequent jobs features “directing Hollywood movies”, amazingly. Carla Lane, fuck off.