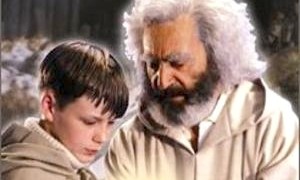 “HAVE YOU HAD YOUR POSSET, KAY?” Archetypal Edwardian “moral” fantasy for kids by John Masefield gets archetypal “big” budget BBC treatment with varying results. It’s Christmas in posh Edwardian England and, in that perpetual snowy Edwardian wonderland, a posh Edwardian boy is given an Edwardian box by visiting Edwardian hobo Cole Hawkins (played by DR WHO) which, when opens, transports him into a Lion, Witch and Wardrobe rip-off “magical” Edwardian fantasy land. Quantel Paintbox palaver then follows, including deer-deforming Herne the Hunter, a bird thing, and much flying about in sewers. Effects variable at the time, but the intervening years have smoothed all that out – they now look uniformly shite. Baddie got killed by a sack of flour.