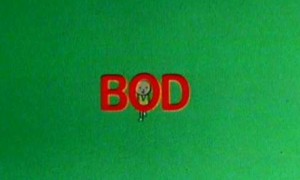 BALD-HEADED TYKE runs amok in triangle dress by terrorising neighbourhood with blank expression and whistling. Repeatedly. Originally involved just the eponymous kid mooching around an entirely blank environment and encountering the same characters over and over again, who’d enter to own DEREK GRIFFITHS-penned theme: Aunt Flo, PC Copper (“Po-po-po-pom pom pom!”), Frank the postman (“Doo, do-do-do-do-do, do-do-do-dooo!”) and Farmer Barleymow. Minimalist philosophising ensued (“They have their uses, gooses”). And that was it – until a few years later and proto-director’s cut version suddenly turned up added a whole new ending charting the utterly unrelated exploits of Alberto Frog and his Amazing Animal Band. Each week, the band would land up somewhere and utilize their musical skills to do some bloke or other a favour. Alberto a tight sod; when asked what whoever-it-was could do to repay him, he invariably chose…a milkshake. Every fucking time. Only the flavour varied, and then not by much. The rest of the band seemed nonplussed at getting bugger all for doing the real work. Just when it seemed the whole kaboodle was about to end…along came another bit! This involved a tedious game of “interactive” snap with Bod-themed cards. Would the thing never end? Answer: yes, with the titular bugalugs pissing off into the distance to a fine Griffiths piece of polyrhythmic swing (“There goes Bod…but he’ll be back!”).