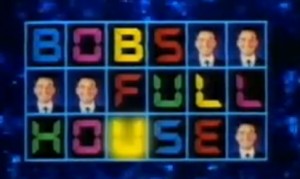 LORD MONKHOUSE’s finest hour, aka How To Design The Perfect Game Show. This one had it all. On would come Bob in a smart suit with some nifty gags and instant catchphrasery: “In bingo lingo it’s clickety-clicks, time to take your pick of the six!” Contestants arranged in novel four-booth system, reminiscent of PUNCHLINES. Booths fronted with bingo card, with game split into three rounds – light corners, light middle line and light whole card by answering questions. Winner of each round gets to choose wonderful/tacky prize from array revealed by rotating cylindrical screen (always a His ‘n’ Hers bathgown set on offer). Last round was pacey, quickfire stuff, with regular updates on progress from the Monk (“Dave NEEEEDS three…Sharon, you NEEEEEED seven…”). Central to the show was that most 80s of devices – the rotating structure (see BLANKETY BLANK, BULLSEYE). Here we had a three-sided construction, with the Monkhouse Mastercard, Golden Card Game and Bob’s Full House logo on each side. Golden Card Game oozed excitement with the holiday destination was gradually revealed letter by letter (“Let’s hope it’s not Bognor!”) Plus ever-present danger of being “wallied” if you got a question wrong. Everything you’d ever want from a game show and the perfect shopwindow for Bob’s genius. Fact.