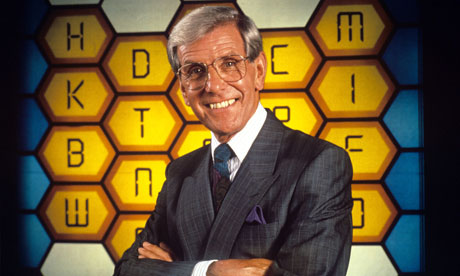 WE’RE ALL FAMILIAR with this one. Take two Morrissey lookalikes, one weirdo you wouldn’t touch with a bargepole, some teddy bears with scarves, a firm-but-friendly host who was the first James Bond (fact!) easy-to-middling questions, five pounds (gosh!) for every correct answer and a seemingly infinite potential for unfunny catchphrases (“Can I have a P please, Bob?”), and what do you have? Essential viewing, if only because it coincided with your tea. Fridays always marked by tedious hand-jive business at the end (fucking sixth-formers!) Stellar opening titles, flying through the futuristic city of octagon boffins inside the foyer at Central TV. Studio was similarly decorated with stone pictures of famous clever bastards, like that bloke with the beard lying down (later designers lost plot slightly with induction of Hilda Ogden into BB Wall Of Fame). Crunch time came with “Put yourself on the hot spot please!” for the chance to win a hand-gliding holiday in northern France. Alternative was to do badly and get a Blockbusters jumper. Kids wore school uniforms in the early days, but this uncool practice soon died out. The board, meantime, was always fascinating, worthy – you’d think – of a penetrating investigation by SUE ROBBIE on TX, but ultimately revealed to just be flashing lightbulbs. As usual, all latterday revivals were shit. But hey, that’s Blockbusters! Those clever bastards in full: Abraham Lincoln, Isambard Kingdom Brunel, Tina Turner, Mother Teresa, George Bernard Shaw, Amy Johnston, John Wayne, Harold Macmillan, William Shakespeare, Charlie Chaplin, Winston Churchill, Meryl Streep, Albert Einstein, Lenin, Harrison Ford, Mao Tse Tung, Kenny Dalglish, Bob Geldof, Beethoven, Martina Mavratilova, Hilda Ogden, Woody Allen, Toyah, Confucius, Queen Elizabeth I, a punk rocker, Moses, Daley Thompson, Marilyn Monroe, a teacher, an astronaut, a diver, a Rastafarian, and Tutankhamen.