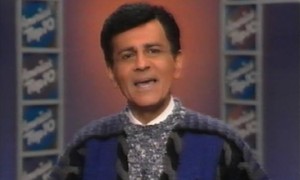 “HELLO, I’M CASEY KASEM,” beamed the garishly-sweatered host at the start of this imported Billboard countdown-cum-cheap syndicated overnight time filler, standing behind a director’s chair, sweeping his arm and clenching his fist in a matey fashion. More famous in this country as the voice of Shaggy (“like, make with the club sandwich with an olive in the top, Scoob, while I hide from the janitor in the vampire costume!”), the Kase soon became a familiar face to post-pub revellers over here, although it’s said that AT10 was the pawn in a game for bored ITV regional schedulers, who attempted to place it at a different time every week. Music largely risible: the likes of Atlantic Starr, Starship, “…aaand from Shrews-burry, England, at number eight with China In Your Hand, it’s T’Pau!” There was always a dreary trivia question at the end too, usually sent in from poor fat sod watching the show on WXKZ or something. Sadly, the Kase’s all-time classic quote concerning U2 never made it to air: “The band members are Bono on vocals, lead guitarist Dave Evans, nicknamed The Edge, and – oh, this is bullshit. These guys are from England and who gives a shit?” You tell ’em, jumperboy.