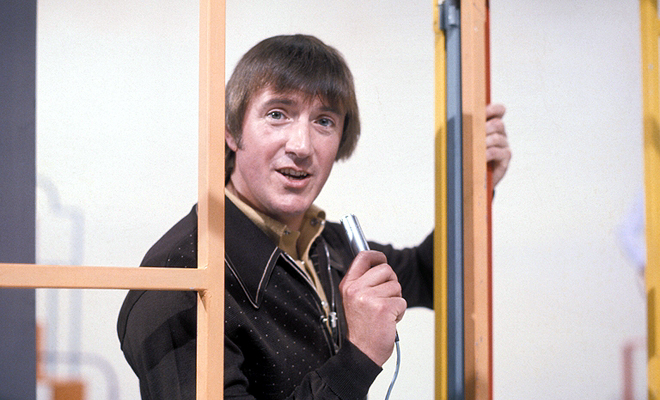 FOR NINE CHRISTMASES between 1974 and 1982, the All-Star spin-off from THE RECORD BREAKERS was the glittering festive showpiece of the BBC Children’s Programmes calendar, bringing together all your favourite presenters and, for no adequately explained reason, getting them to act, sing and dance about a bit.

Moreover, it was never exactly clear why Roy and Norris’s domino-toppling catalogue of pointless human endeavour had been selected as the canvas for this sparkling tableau. McWhirter’s patented stout-flogging brand of superlative trivia forever seemed to take a back seat to, say, JOHN CRAVEN exhibiting a nimble foxtrot or JONATHAN COHEN cutting loose with some free-form jazz piano. 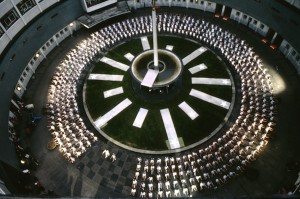 Of course, the one thing that everybody remembers about TASRB is Roy Castle leading a mass tap-dancing world record (in aid of Action Research For The Crippled Child, lest we forget) in the middle of BBC Television Centre from 1977 (“Just outside with tapping feet! It’s the biggest dance troupe in the whole world, waiting for the beat!”), which of course we love cos you get to see loads of TV Cream’s favourite building in the world, in addition to a load of synchronised juvenile hoofing.

That 1977 show represented TASRB at its peak, kicking off with Roy attempting to sing Catch A Falling Star, only to be interrupted by his co-stars assailing him with facts about astronomy (“I say, Roy! Did you know…?”), a running joke involving JOHN NOAKES being pied at every opportunity, and KENNETH WILLIAMS demonstrating an oversized saxophone and attracting some knowing laughs from the orchestra with some ribald comments, in a scene once masterfully recreated in the TVC office (“Down here, Roy!”). Sadly, a flip through Ken’s diaries reveal he didn’t think much of the show (“I am virtually acting as a crowd artist in some scenes! And as set dressing in others! I’m not part of a team. I’m something better.”)

The other highlight of 1977’s show was the retelling of the Hans Christian Andersen story, with Roy in the lead role, natch, and Cheggers as his trusty apprentice. It’s always good to see NOEL EDMONDS in an acting capacity, and who knew PETER PURVES possessed such a pleasing tenor voice? Although there is a rather sickly soft-focus sequence with Roy attempting to woo Madame Dora, aka MAGGIE “AND I’M MAGGIE” HENDERSON.