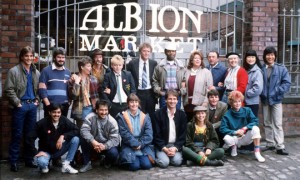 IT HAD a fantastic theme tune, if you watched closely sometimes you could see the back of Granada’s studios, and DAVID “SCIENCE WORKSHOP” HARGREAVES was in it. Apart from that, ALBION MARKET was your archetypal one-dimensional, craply acted and totally confusing affair created solely for the sake of it. Centrepiece “covered market” location looked like a shitty warehouse, which was no surprise given it was Granada’s old prop store. Too many characters and too much hype pissed off viewers and ITV schedulers, especially LWT who hated having to show it on Friday nights, erstwhile home of Brucie and patented big fuck-off LE bollocks. Sunday night episode died on its arse thanks to being up against OPEN ALL HOURS. Two months after launch saw a desperate TV Times devoting pages to plugging the characters, profiling them as if no-one had heard of them before, which was to a degree completely true. Despite mobilisation of terribly self-conscious “icons” (TONY BOOTH and HELEN SHAPIRO for fuck’s sake), the whole thing was put out of its misery precisely 100 episodes after it began with a wedding and someone being born.