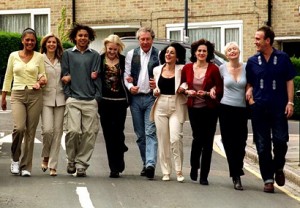 ALBION MARKET…with attitude! Stoic attempt to make ITV look all upmarket and posh and pretend that its viewers are aching for a soap opera that crosses TRAINER with SO HAUNT ME. Spoiler: They weren’t. Bonkers plot wouldn’t have looked out of place on MICHAEL WINNER’S TRUE CRIMES. Cross-section of every race, creed and colour lives on a street in Greenwich. They all have humdrum lives, except they don’t, because they all have Hidden Secrets, and when a girl who looks like Sandra Dickinson goes missing, all the Hidden Secrets begin to spew out. One side of the road is occupied, a la STELLA STREET, by a battery of fading faces: Angie off of [cref 3530 THREE UP, TWO DOWN], Dorien from BIRDS OF A FEATHER, Sergeant Harriet Makepeace, Dr Who Paul McGann’s brother, one of the prossies on BAND OF GOLD, one half of [cref 2676 HE’S PASQUALE, I’M WALSH], and Mike Gambit. On t’other side of street live the Beautiful People, including half the future cast of HOLLYOAKS. They meet in the middle. Much sauciness over the sun-dried tomatoes ensues. As does murder, mistaken identity, mystical visions, a visit from a time-stopping stranger like that bloke off HEROES, and SHANE RICHIE. Originally aired three times a week at teatime, with a fussily-titled “adult” omnibus, NIGHT AND DAY: THE REMIX, once a week after the News at Ten. REMIX subtitle was ditched after just one week. Teatime episodes soon went the same way. Weekly omnibus then slid further back in the schedule until that hallowed must-watch hour of 1am. Final episode fast forwarded four years for no good reason other than to reveal that the girl who went missing on day one had now become – well of course! – a ghost!