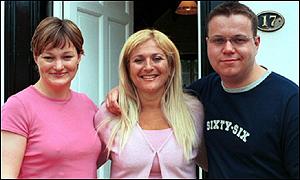 EMERGING BLEARILY FROM THE DOCU-SOAP ERA, BBC1 staggered into the new dawn – soon to be dubbed ‘reality TV’ – with this capering, low-rent series in which cul-de-sac dwelling ‘real people’ would play host to a celeb. While Mum generally cooed over the prospect of dinner-on-the-lap with George Clooney, to the hilarity of all, in reality it was either Jeremy Beadle, Frank Bruno, Denise Welch, Richard Whiteley, Michael Winner or – in the first episode – Vanessa Feltz looking nervously out of the window in that fast approaching cab.

Quickly becoming a THORN BIRDS-shaped own-goal for the Beeb (La Feltz later moaned: “Beating ITV with Blue Planet is a triumph. Beating ITV with Celebrity Sleepover is a tragedy”) it wasn’t all that bad, particularly when you take the TV temperature of the time (first episode aired on the same night C4 succumbed to all-out Paedogeddon).

Highlights included Beadlebum thundering: “If they show me the figure where they got bigger figures than I did, I shall be very impressed. Show me the figures!!” when Mum asserted Lisa Riley had improved YOU’VE BEEN FRAMED! Meanwhile, Frank Bruno proved aloof and moody. Nary a “hur hur hur” was heard, the boxer instead musing: “I’m in a strange place, strange environment. I’m a Scorpio, man, I like to know what’s going on.” It’s called the regions, Frank. Get used to it. Michael Winner, on the other hand, was a proper old gent.

Also provided steady work for PAUL “WHICH MEANS DANNY BAKER’S NOT AVAILABLE” ROSS who’d coach Mum or Dad, ready for their ‘big’ interview with celeb at the end of the show. But we’ll try not to hold that against it.