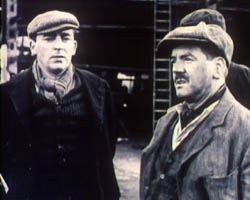 By Bill Bryden. Story of the beginnings of revolutionary socialism, set amongst the shipyards of greenock during the first half of the First World War. The titular Rough (James Grant) walks 15 miles from Johnstone in search of a start in the shipyards, and is advised to head for the nearest pub. There he meets various locals, including the redoubtable Pat Gatens, and cantankerous, one-legged Boer War veteran Hughie (Fulton MacKay), who initiate him in the ways of bribery regarding shipyard foreman Jake (Roddy MacMillan). Willie attends regular workers’ meetings held by left-wing firebrands, and subsequently rises to rank of shop steward, determined to negotiate a two-bob raise for all.

But the war looms, and Willie, a staunch anti-imperialist, clashes in the pub with co-workers on the way to the front, egged on by Hughie, who leads them in a drunken raid on a germanic-sounding optician’s shop. Determined to hold fast for the good of the workers, Wllie calls a strike, which quickly spreads along the Clyde. Hardship overtakes all the workers’ families – in one moving scene, Willie pays respects to Pat’s deceased infant daughter, the tiny casket standing in the corner of the front room. Charlie McGrath, a socialist even more hardline than Willie, gives him the courage to hold fast in the face of poverty, but the escalating war makes nothing easier. Hughie dies after selflessly joining in a riot with strike-breakers, and eventually Willie and Charlie are jailed after Charlie publishes an article by Willie questioning the workers’ need to go to the front. On release, Willie returns to the yard – now operating again – to find Pat and Jake have compromised in the face of the insurmountable opposition brought on by the worsening war (ironically this compromise brings the longed-for two bob rise at last).

A strong and didactic play, which broke new ground when staged at Edinburgh’s Royal Lyceum Theatre (with largely the same rep company as MacMillan’s The Bevellers – qv), although large parts now play like socialist tracts broken up into over-expository dialogue. What tends to last now is the feel for local period detail – the atmosphere of the impossibly tiny and crowded James Watt Bar, of the shipyards – and details like the half-crown-in-matchbox method Willie bribes Jake with, and the performances, especially Mackay’s are exemplary.