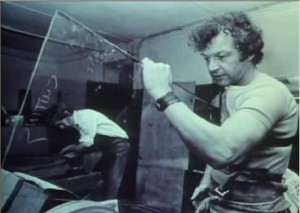 A day in the life of a basement bevelling (grinding the bevelled edges and decorative grooves into plate glass) workshop in Glasgow, through the eyes of fresh-from school apprentice Norrie, who has a rough introduction into a dying craft. The shop foreman Bob (played by writer and former apprentice beveller Roddy McMillan) takes him under his wing and enthuses about the hard but noble craft, but the other bevellers pose problems, in ascending order of psychosis – Joe, the junior; Peter prone to seizures (but “it’s no’ epilepse!”); Charlie, a weight-training obsessive, who keeps a ton lift in the corner of the shop, and periodically shows off by lifting it, then slamming it to the floor, causing the whole basement to shake; and worst of all The Rouger, known only by his job title, who perpetually winds everyone up past the point where it could be considered “a wee bit o’ fun wi’ ye”. Two events finally convince Norrie to jack it in after the first day – the lunchtime arrival of Alex Freer, a ghostly, pallid alcoholic ex-beveller who advises him to quit while he can, for the sake of his physical and mental health; and an accidental glimpse of The Rouger, thinking the shop empty, trying it on with Charlie’s woman. Caught spying, Norrie stands up for himself, and The Rouger lays off beating him up, for fear of being grassed up to the super-strong Charlie.

It’s an amazing, claustrophobic play, full of violence (plus the odd sweet moment, when they’re all a-bevelling, the workers break into a sweet, sentimental song). As well as being a paean to and catalogue of the ins and outs of a dying craft (feedin’ up, culet, rouging etc. are all explained), it’s a compendium of baroque Glaswegian vernacular (“Ye hure-spun, bastrified, conscrapulated little prick!”, “I’ve seen merr go in a haun-reared Abernethy fuckin’ biscuit!”, “It’s blohooroble, so it is! Diabastric and blohooroble!”)

But specific to trade and location as it is, Norrie’s initiations will be familiar to any former apprentice. Finally, the day falls apart – Peter has a severe fit while moving a big job, Charlie gashes his hand, and time is called early. Finally wound up once too often, Norrie blabs his lunchtime secret to everyone, but Charlie, having judged Norrie (“not one a’ us”), takes the Rouger’s side, and The Rouger punches him one in the stomach, which leaves him balled up on the floor, sobbing, as they all leave. A brilliant, bleak and uncompromising play, though not without its own kind of humour and warmth.