“Will Santa offer the gift of salvation?” 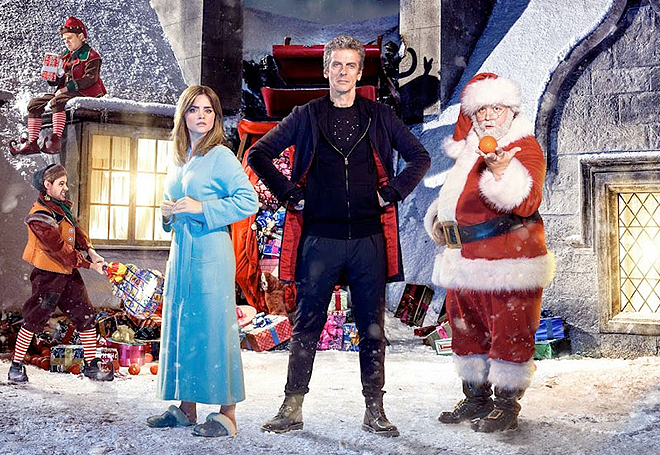 The main battle for audiences on Christmas Day has always been sold as BBC1 vs ITV – although ITV rarely seem to make more than a token effort. Indeed, BBC1’s competition on the big day is more likely to come from the dinner table, the games console and the extended family than it is any other channel. While the broadcasters may cling to the idea of everyone sitting in silence to give the programmes their full attention, the chances of that actually being the case in the majority of homes seems pretty unlikely.

It used to be that the big shows would have to be watched live, or you’d wait until the following Christmas – or if the BBC were particularly stretched, the summer – to see them again. But nowadays it’s easier than ever to catch the main TV attractions without having to wolf down the turkey or tell Gran to keep the noise down. PVRs were whirring their way throughout the day, the Beeb were eager to promote iPlayer as an alternative and almost everything on the 25th got a swift repeat over the next few days.

This is perhaps the main reason why the highest rated programme on Christmas Day – as last year, an episode of Mrs Brown’s Boys – could only pull in 7.9 million viewers on the day itself, over a million down on 12 months ago, while everything else also reported declining ratings year on year. This led to much hand-wringing and newspaper reports pondering if the Christmas fare was substandard, although early indications were that the number of people watching on-demand and recordings was extremely high and many shows edged up to a healthier figure as these viewers were added onto the ratings.

Certainly the BBC1 schedule, though perhaps a bit familiar in places, seemed perfectly good with big hit shows being rolled out one after the other, and no obvious weak spots like the episodes of Ground Force, Changing Rooms and Bargain Hunt that filled awkward gaps around the turn of the century, or even last year’s Michael McIntyre DVD.

Christmas Day on BBC1 got off to a solid start with the usual fare – Breakfast, cartoons, a service, the film Gnomeo and Juliet and a repeat of Only Fools and Horses. The latter was quite interesting though as it was a rare outing for ‘A Royal Flush’, the special from Christmas Day 1986. This was famously a very fraught production behind the scenes, with illness and other commitments (most obviously John Sullivan also writing Just Good Friends for the same day) meaning production ran way behind schedule to the extent contingency plans were in place to perform it live on Christmas Day. Though this didn’t happen, the resultant episode, rushed to the screens, was considered one of the worst of the series and John Sullivan supervised a re-edit, removing some 20 minutes, before it returned to the repeat rota.

Top of the Pops followed at 2pm, yet again, being probably as accurate and as effective a summary of the year’s hits as it had always been, and despite the Beeb clearly having absolutely no interest in reviving it on a regular basis, it looked as though the annual special was now a fixture in the schedule and seemed less at risk from the axe than at most times in the past few decades.

If you added together the ratings from its screenings on BBC1 and ITV (and, though it seems unlikely anyone would bother watching it there, Sky 1), The Queen’s message was actually the highest rated programme of the entire day – which perhaps says more about the low ratings for most other programmes than any increased interest in what Liz had to say. Almost as long a tradition now is BBC1 following the message with an animated film – in this case, another outing for the Shrek franchise in the shape of its spin-off Puss in Boots.

Strictly Come Dancing followed at 5pm, which not only saw the triumphant return of Bruce Forsyth as host but also past contestants who danced again. Given that in the past few years when new competitors appeared on Christmas Day only a handful had been any more interesting than the participants we’d been watching every week during the series, it probably made more sense to invite back old favourites, and the special, despite its earlier slot, managed to make it to third place in the day’s ratings – helped, perhaps, by it being one of the few shows viewers could happily dip in and out of, plus with no repeat scheduled.

Doctor Who followed at 6.15pm, and this year’s episode took something of a tumble ratings-wise with nearly a quarter of last year’s audience switching off – but at an earlier slot, minus the 50th anniversary hoopla of 2013 and without the obvious attraction of a regeneration to pull in the casual audience, this wasn’t perhaps too much of a surprise.

Following that came a programme making its debut on Christmas Day BBC1… for its penultimate episode. Miranda was the next in a long line of comedies that had started quietly, in this case, on BBC2, before pulling in large audiences through repeats and word of mouth. After three successful series, the last on BBC1 two years ago, this episode, and the second on New Year’s Day, were promoted as being the last ever, this instalment seemed to be coasting on viewers’ affections a bit too much, relying heavily on continuity, which may have puzzled any newcomers looking in on this high profile position.

Miranda Hart was on again straight after in the third Call the Midwife Christmas special. Unlike last year’s early evening placing, 7.50pm seemed a slightly more appropriate slot for this series and signalled to viewers a clear dividing line between absolutely all-ages family fun and something a bit more grown-up. While no programme this Christmas was up year on year, Midwife showed one of the smallest declines – and won its annual battle with Downton Abbey, which is pretty impressive given the previous episode of the BBC show was back in March, whereas Downton was still fresh in viewers’ memories only a couple of weeks after its last series.

If nothing was going up in the ratings this year, the Beeb would have to take their victories where they found them, and the news that EastEnders was the day’s top soap – and second most watched programme overall – would doubtless have been very welcome given 12 months ago the show had been in a pretty poor state. Some interesting new storylines and characters had given it a boost and, while it wasn’t pulling in audiences rivalling its pomp in the 1980s and 1990a, at least ratings seemed pretty solid for now and a few more people got to see the improvement on perhaps the only day of the year they ever watch it.

Mrs Brown’s Boys then followed, and, for the second year running, pulled in the day’s biggest audience – although down on 2013 when it was shown half-an-hour earlier. This was another show that now existed only as specials rather than a regular series and so remained big news with viewers, if not with critics. Then Michael McIntyre was back, though happily this year with a brand new special made especially for the BBC rather than an old DVD. His Very Christmassy Christmas Show was, like Mrs Brown, very much an acquired taste, but meant BBC1 was all new and original from 2pm to near midnight – a highly impressive attempt.

As usual ITV’s Christmas Day revolved around the four hours in the evening with Emmerdale, Coronation Street and Downton Abbey, with the other 20 something of a chore to be filled as cheaply and effectively as possible. A host of films took us up to The Queen, followed at 3.10pm by an ITV excusive as Alan Titchmarsh took a tour of the grounds of Buckingham Palace in The Queen’s Garden. Although this seemed a decent combination, the programme was, like 2007’s Lights Camera The Queen, totally out of place in a slot when something a bit brasher is required.

Then after skewing extremely old, ITV decided to aim for the younger audience with a screening for Buddy’s Musical Christmas. This was an animated spin-off from the film Elf which, in previous years, had become something of a Christmas favourite. This wasn’t, though, and if it hadn’t been for that connection it’s unlikely it would have enjoyed such a prime slot – its stop motion-animation and gloopy moralising looking pretty old hat next to the Pixar and Aardman fare we were used to seeing on Christmas Day. Coupled with a hopeless slot it pulled in less than a million viewers. You’ve Been Framed and Paul O’Grady’s regular dispatch from Battersea Dogs Home took ITV into the soap block in vaguely festive style.

Of the genuinely big shows, Emmerdale, as usual, failed to beat its BBC1 opposition but perhaps surprisingly Coronation Street didn’t either, dipping 20 per cent from last year and losing out to Call the Midwife despite what would appear a very useful 8pm slot. Downton Abbey also suffered a sharp fall compared to 2013, though, as ever, it’s hard to imagine ITV getting too upset about ratings on a day that’s not a top priority for them commercially.

Elsewhere BBC2 offered a couple of programmes among a series of repeats that were a cut above the usual, including a celebration of 60 years of Carols From Kings, a tribute to Tim Rice, a new instalment of James May’s Toy Stories and a new episode of QI rather oddly scheduled against comedy on BBC1. And for those hankering for Christmases past there was a Morecambe and Wise compilation, Blackadder and, back after a year away, a Dad’s Army repeat.

Channel 4 also presented more of the mainstream fare that in recent years has replaced the religion and fine arts that used to offer a self-conscious alternative to the Big Two. Arthur Christmas was a film premiere that could have just as easily sat on BBC1, while Alan Carr’s two-hour special presented the lightest of light entertainment. At 8pm was a documentary looking at the huge appeal of Disney’s Frozen – which was the big film premiere on Sky Movies.

Channel 5 laid on the regular odds and sods line-up of classic films (Chitty Chitty Bang Bang, Scrooge) and cheap clip shows (Britain’s Favourite Christmas Songs), though perhaps the oddest bit of this or any other Christmas was the primetime screening of Chas and Dave’s Christmas Knees-Up, as seen on ITV 32 years ago to the day. Who’d have imagined Jimmy Cricket appearing on primetime Christmas Day again?

The pretty unspectacular ratings seemed to suggest Christmas Day TV had become less a part of the public’s festive season than ever before. Yet with online and on-demand viewing beginning to dominate, by New Year’s Eve just as many people will have watched the big shows as did in the past. The difference is they’re not all doing it at once.